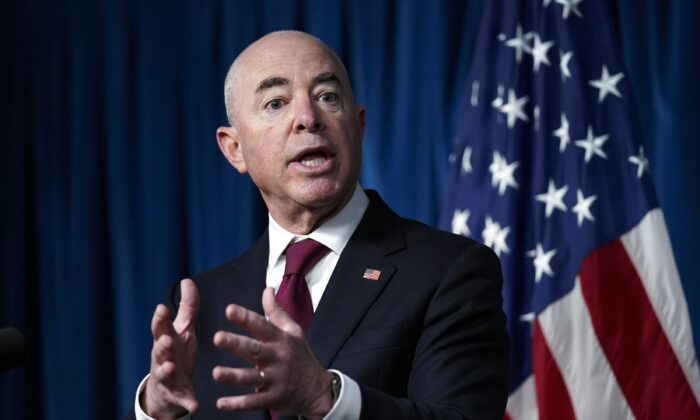 U.S. troops flew or facilitated the flight of more than 120,000 people from the airport in Kabul during about two-and-a-half weeks through Aug. 30, when the troops withdrew from Afghanistan completely.

Approximately 13 percent of the evacuees that have entered the United States have been U.S. citizens, according to Mayorkas. Another 8 percent were lawful permanent residents. The rest were Special Immigrant Visa holders or applicants or other Afghan nationals deemed vulnerable to Taliban terrorists if they had not been evacuated.

Mayorkas has been using his powers of parole to let in some Afghans who lack a visa, the Department of Homeland Security revealed last week. Mayorkas declined to say how many Afghans have been granted parole.

The evacuees were initially flown from Kabul to U.S. military bases in third countries, such as Ramstein Air Base in Germany.

They are then shuttled to one of eight military bases scattered across the country, including Fort Bliss in Texas and Fort McCoy in Wisconsin.

Approximately 25,600 Afghans were being housed at the military bases as of Sept. 3, Pentagon spokesman John Kirby told reporters in Washington.

The military has a capacity across the eight installations for about 36,000 but is working to increase that to at least 50,000. No more bases are expected to be needed to house the evacuees.

About 1,000 Afghans have been resettled, or moved off of bases, according to U.S. Air Force Gen. Glen VanHerck, commander of the North American Aerospace Defense Command and Northern Command.

Mayorkas said the number of evacuees is expected to come in above 50,000.

“The number is something I don’t want to estimate because—as I’ve mentioned before—our commitment is an enduring one,” he said. “This is not just a matter of the next several weeks. We will not rest until we have accomplished the ultimate goal of Operation Allies Welcome.”

U.S. officials pledged to Afghans who helped U.S. troops in the war in Afghanistan that they would be evacuated before troops withdrew. Some were not. Between 100 and 200 Americans were also left behind.

Governors from each party have said they will welcome refugees to their states.

“The Afghans fleeing the Taliban regime served alongside America’s military forces and fought for freedom. We’re grateful for their efforts and Arizona wholeheartedly welcomes our fair share of the refugees in our state,” Arizona Gov. Doug Ducey and Arizona House Speaker Rusty Bowers, both Republicans, said in a joint statement last month.

But some officials have expressed concern about the influx of refugees, arguing they could pose security problems.

Rep. Tom Tiffany (R-Wis.) said he visited Fort McCoy last week and discovered all Afghan nationals there were on parole.

“The Biden administration has circumvented the SIV process,” he said.

Afghans are also being allowed to leave the base at will, he added.