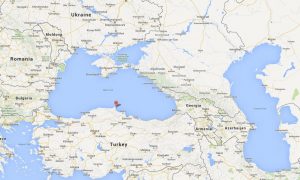 Archaeologists made an incredible discovery when they found two very ancient chariots, and a hoard of well-preserved artifacts, within a 4,000-year-old burial chamber in the country of Georgia, in the south Caucasus, according to a report in Live Science.  The remains of a chief and six other people were found within the chamber, which may reflect the sacrifice of slaves who were buried with their Master.

The timber burial chamber was uncovered from within a 12-metre mound, known as a kurgan, in eastern Georgia near the municipality of Lagodekhi. ‘Kurgan’ is the Russian word for tumulus, a type of burial mound or barrow, heaped over a burial chamber.  Kurgan barrows were characteristic of Bronze Age peoples, from the Altay Mountains to the Caucasus, Ukraine, Romania, and Bulgaria. They are complex structures with internal chambers. Within the burial chamber at the heart of the kurgan, elite individuals were buried with grave goods and sacrificial offerings, sometimes including horses and chariots. Kurgans were used in the Ukrainian and Russian Steppes but spread into eastern, central, and northern Europe in the 3rd millennium BC.

“One of them was a chief and others should be the members of his family, sacrificed slaves or servants,” said Zurab Makharadze, head of the Centre of Archaeology at the Georgian National Museum.

The burial dates back to the Early Bronze Age, a time before domesticated horses appeared in the area, so it is believed the chariots were pulled by oxen.

The armchair symbolizes the power that individuals like the chief had. “The purpose of the wooden armchair was the indication to power, and it was put in the kurgan as a symbol of power,” said Makharadze.

While numerous chariot burials have been unearthed around the world, such as the perfectly preserved remains of five chariots and twelve horses in Luoyang, China, the Georgian discovery is among the oldest of those that have been found.