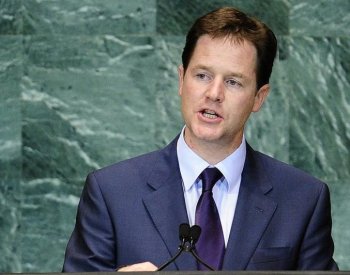 Marco t'Hoen
View profile
Follow
biggersmaller
Print
At the United Nations’ General Assembly in New York, a three-day summit started Wednesday to meet internationally set goals known as the U.N. Millennium Development Goals (MDG). While the summit is hoping new pledges by member nations will be made and kept, the only confirmed news of money pledged so far has been $40 billion in resources committed over the next five years for improving women’s and children’s health services.

Over 140 world leaders are present this week to discuss the progress on the five anti-poverty goals adopted at a summit held in 2000.

Goal No.1 is to half the portion of people living in extreme poverty by 2015. Goal No. 4 aims to reduce the mortality rate for children under the age of 5 by two-thirds and goal No.5 is to reduce maternal mortality by three-quarters.

The challenges are many. The global economic crisis and rising food and energy prices put countries under financial pressure, thus creating an obstacle for reaching the goals. A lack of basic security also makes it harder to achieve the MDG goals.

In spite of the obstacles, speakers on the first day optimistically stated the importance of the MDG's and their commitment to them.

Britain's Deputy Prime Minister Nick Clegg explained that the goals “are not simply charity, nor are they pure altruism. They are also the key to lasting safety and future prosperity for the people of the United Kingdom," AP reports.

Clegg explained that a bad situation in “fragile places like Afghanistan” can lead to the planning of hate induced terrorist attacks, criminals bringing harvested drugs to the U.K., and refugees fleeing the situation. He encouraged other countries to keep their aid commitments despite the fallout from the financial meltdown like the U.K. does.

French Foreign Minister Bernard Kouchner said the world must get the message that it is not only money that is needed, but to end poverty, “We need to have strong political will.”