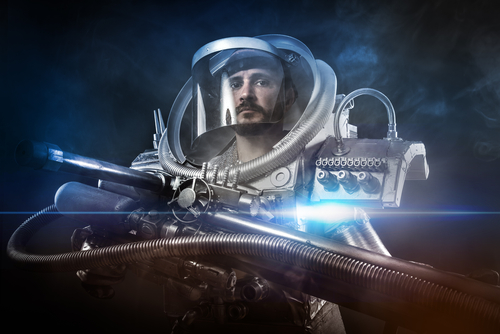 4 Things to Consider for Space Warfare, Such as How Bullets Fire in Space

As we develop plans for space tourism and, perhaps, colonization in the not-too-distant future, space warfare may also be on the horizon.

Here’s a look at some of the things we may want to consider should we encounter hostile space species.

1. How Are Bullets Fired in Space?

Image of a bullet via Shutterstock

On the moon, a bullet exits the gun at the same speed as it does on Earth, but it doesn’t encounter the same air resistance, so it maintains speed longer, according to Kate Becker, who graduated with a Masters in Astronomy from Cornell in 2004. She is one of several astronomers who answer questions on a Cornell website titled “Curious About Space? Ask an Astronomer.”

A bullet will also go six times further on the moon. Without as much gravity as on Earth, Earth’s weapons will have longer range capabilities in the hands of space soldiers.

Of course, light sabers or guns that shoot deadly laser beams may be the weapons of choice.

2. Martians Could Sneak Up on You—Ninja Stealth Easier to Achieve

Space does not support sound waves. Light waves and radio waves travel through space, but sound waves require air, explains Dave Kornreich, an assistant professor in the Department of Physics and Physical Science at Humboldt State University and founder of “Ask an Astronomer.”

Lynn Carter, an astronomer at the Smithsonian in Washington, D.C., adds: “I know in movies a lot of times they play sounds when things explode, but I don’t know of any cases where this would actually be realistic. Because space is a vacuum, gasses released into space expand very quickly, and as they expand their density decreases.”

Image of sound waves and an ear  via Shutterstock

3. How Fire Works in Space

Fire can be more deadly in space than on Earth, because of its tenacity. Fire creeps in microgravity, rather than jumping and dancing in the intense flames we’re used to on Earth, but it survives on less oxygen and can burn for longer. Researchers believe our conventional methods of extinguishing fire are not as effective on fire in space, but they are working on developing better methods.

4. Bullet-Proof Kevlar Has Been Confirmed Space-Safe

Aerospace company Thales Alenia performed extensive studies on Kevlar’s performance in space. The name of the study says it all: “Space Environment Characterisation of Kevlar: Good for Bullets, Debris, and Radiation Too.”

Bulletproof vests on Earth are made of Kevlar. The material’s space compatibility had to be thoroughly tested before it could be used to shield the International Space Station and other structures. Thales Alenia states: “The suitability of a specific material is quickly assessed to ascertain that no show-stoppers exists.”

That means no unexpected reactions or vulnerabilities for space battle gear!

Image of a Kevlar bulletproof vest via Shutterstock

*Image of a fantasy astronaut warrior via Shutterstock