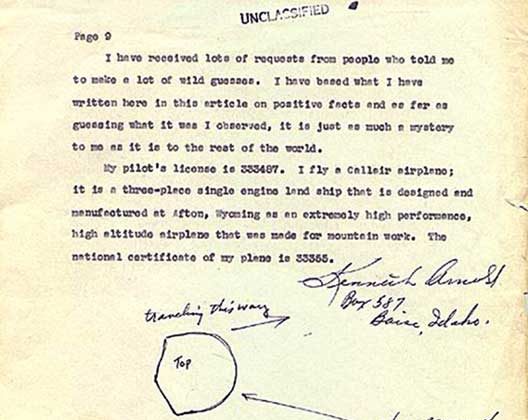 A diagram drawn by Kenneth Arnold, the pilot made famous for his claim to have seen what he called "flying saucers" in 1948. (Wikimedia Commons)
Beyond Science

More than 3,500 documented sightings of “Unidentified Aerial Phenomena” by pilots have been recorded by the National Aviation Reporting Center on Anomalous Phenomena (NARCAP).

Here is a look at four pilot sightings.

Captain Jim Courant was flying a commercial plane near Albuquerque, New Mexico, in 1995, when he saw a blue-green oval shape approaching.

Courant, who has now been flying for more than 30 years, described the experience at the National Press Club in Washington, D.C., on May 3: “In a flash of burning white light, the object suddenly shot up at a 45 degree angle.”

Four other pilots reported the object to the air traffic control tower.
“One pilot said it must have been a meteor,” Courant recounted, adding, “I got on and said, ‘Since when does a meteor go back up?’”
He said many pilots choose not to speak about unidentified objects they’ve seen, or are told not to talk about them. He gave the example of a pilot who was flying a 747 over the Pacific in 1980. He was amazed to see a large flying object, but when he was debriefed upon arriving at his destination in Japan, he was told never to talk about it again.

Some pilots have been encouraged to speak, however.

Captain Ray Bowyer was encouraged by his employer, Aurigny Air Services, to discuss what he saw in the highly publicized sighting above Guernsey, UK, in 2007.

He said on the “Richard and Judy Show” at the time that he saw a “brilliant yellow” object. It was sharp and well-defined he said. He could also see parts he described as “graphite gray.”

At first he thought it might be reflecting light off greenhouses below, but it was too constant and as he held his gaze on it for a full 12 minutes, he knew it was a real object. He also said it was definitely not a cloud formation. He has seen lenticular clouds, the type often confused for unidentified flying objects (UFOs).

Passengers on the flight and his co-pilot all reported the sighting. He said, because it was in controlled airspace, he and his co-pilot were legally obligated to report it, which is how the media must have discovered it.

He saw the object from about 50 miles away and only lost sight of it because he descended below a haze layer. He estimated it could be a mile long.

In 1948, Kenneth Arnold was flying a private plane at a height of about 9,000 feet near Mount Ranier in Washington. He saw nine shiny objects, which he later described as “flying saucers,” traveling at a speed he estimated to be 1,000 mph or more, far faster than aircraft could travel at that time.

He described the objects as “mirror bright.”

“They did not appear to me to whirl or spin but seemed in fixed position.”

Here is the text from the above report written by Arnold:

I have received lots of requests from people who told me to make a lot of wild guesses. I have based what I have written here in the article on positive facts and as far as guessing what it was I observed, it is just as much a mystery to me as it is to the rest of the world.

My pilot’s license is 333487. I fly a Callair airplane; it is a three-place single engine land ship that is designed and manufactured at Afton, Wyoming as an extremely high performance, high altitude airplane that was made for mountain work. The national certificate of my plane is 33355.

They did not appear to me to whirl or spin but seemed in fixed position traveling as I have made drawing.
Kenneth Arnold

On Dec. 30, 2012, pilots from three planes all spotted two silver discs as they approached Gatwick airport in England.

The sightings were recorded by Airprox, which tracks near misses and other air traffic control data.

A pilot flying a Boeing 777 reported objects that “appeared to be very slow moving or stationary.” All three pilots on the flight deck saw the objects, according to the report, which is cited by LiveLeak.com. The Epoch Times has requested the original report from Airprox.

The crew reported two “man-made objects, possibly toys. … Further details from the crew, and from the crew of a following B767, added the objects were two white or silver discs at approximately 1,000-1,500 feet.”

No radio-controlled model flying clubs were listed in the area. The objects could not be identified. Saucer-shaped or blimp-shaped model aircraft up to four feet in diameter are available to the public, states the report, though it does not say how big the crew estimated the objects they saw to be.

The crew of an Airbus A319 also saw the objects.