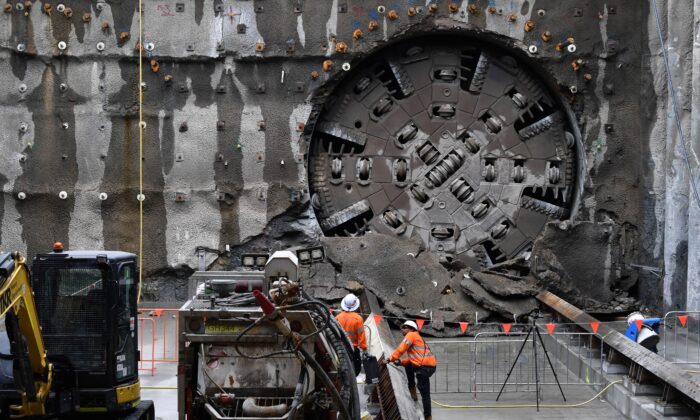 The Cross River Rail’s Tunnel Boring Machine, the 1350-tonne TBM Else is seen after breaking through on the northern portal tunnel of the Cross River Rail project in Brisbane, Australia, on Nov. 25, 2021. (AAP Image/Darren England)
Australia

Nearly four in ten Australian businesses feel that labour shortages are causing a “very significant” impact on their enterprises, according to new research by National Australia Bank (NAB).

The research, which captured the views of 1,600 businesses of all sizes across a broad range of industries from Nov. 16 to Dec. 13, 2021, noted that, on average, businesses considered the labour shortage issue “moderately” problematic over the last three months. However, many expect the situation will worsen over the next 12 months, with large businesses being the most pessimistic.

“Australian businesses are facing significant skilled and unskilled labour shortages. Almost every employer I talk to, from cafés, tourism, agriculture, and manufacturing, is saying, ‘we can’t get workers,’” NAB CEO Ross McEwan said. “Data scientists, digital experts, and technology skills are also in high demand right across the economy.”

Trade workers and professionals are the most prevalent labour shortage, affecting around one in three firms. The industries most affected by a lack of trade workers were construction (72 percent), mining (63 percent), and manufacturing (57 percent), while over half of finance, business, and property firms were lacking professionals.

Construction is also the industry with the most pessimistic outlook for the next 12 months, followed by transport and storage firms.

The research also showed that the state most affected by the shortages was Western Australia. Almost half of the state’s businesses, specifically in the mining sector, identified labour shortages as having a very substantial impact on their operations.

Overwhelming though over half of Australian businesses believe that the issue is solvable if governments open state and international borders, with just under half identifying increasing traineeships and apprenticeships and migrant intake as further potential solutions.

In particular, around nine in ten mining businesses saw opening state and international borders and creating better working conditions as the most favoured solution to the crisis. This was followed by increasing migrant intake.

Businesses in Western Australia also overwhelming pointed to opening borders as a solution, unsurprising given that the state has been closed to the rest of the country and the world for almost two years.