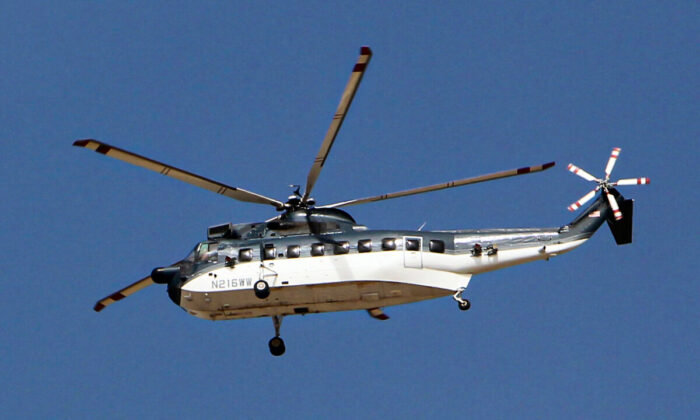 4 Killed in Helicopter Crash on Hawaii Island of Kauai

The National Transportation Safety Board (NTSB) said it is investigating the crash of a Sikorsky S-61N helicopter on Feb. 22 that left four people dead.

Four people were killed after the helicopter crashed during a training operation on the Hawaii island of Kauai, officials confirmed.

The incident occurred at the Pacific Missile Range Facility (PMRF), which is the “world’s largest instrumented, multi-dimensional testing and training missile range,” according to the U.S. Navy.

The Navy base is located in Kauai, Hawaii, and the crash occurred shortly after 10 a.m. local time on Tuesday, the Navy’s Pacific Missile Range Facility said.

At the time of the incident, the helicopter—a Sikorsky S-61N—had been taking part in a range training operation on the base when it crashed on the northern side of the installation.

The helicopter was operated by Croman Corporation, which “provides range support services” to the base, the facility said. According to its website, Croman is one of the world’s most experienced operators of Sikorsky S-61 helicopters.

No one survived the crash.

The names of those killed in the incident have not yet been released.

The Epoch Times has contacted the Navy’s Pacific Missile Range Facility for comment.

Brian Beattie, director of operations for Croman Corporation, told Hawaii News Now that all four crew members on board the helicopter were Croman employees.

The Sikorsky S-61N had just retrieved an object from the water and was trying to drop it on the ground when something went wrong, Beattie said. S-61N aircraft are designed to carry a substantial freight or passenger payload, according to the Igor I. Sikorsky Historical Archives website.

A Kauai County spokesperson said in an emailed statement to Spectrum News Hawaii that county police and firefighters responded and were assisting the military.

“For the Kauai Fire Department, the Waimea Fire Station’s Engine 7 and Truck 7, along with the on-duty Battalion Chief initially responded to the scene, but their assistance was not required. The Navy continues to take the lead in responding to this incident,” said Alden Alayvilla, Public Information Officer for the Office of the Mayor.

Kauai Mayor Derek S.K. Kawakami also confirmed the crash on Tuesday and issued a statement sharing his condolences with the families and friends of those who died.

“First and foremost, our thoughts and prayers are with the families and friends of those who were lost this morning in this heartbreaking tragedy,” Kawakami said. “I know there are no words that can express the extent of what you are going through or provide the solace that you need, but please know that our entire community is here for you.”

“We offer our partners at PMRF any resources they may need, and we offer the families involved our deepest condolences during this difficult time,” Kawakami added.