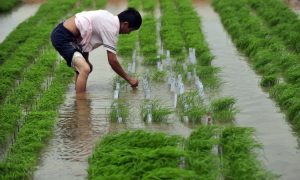 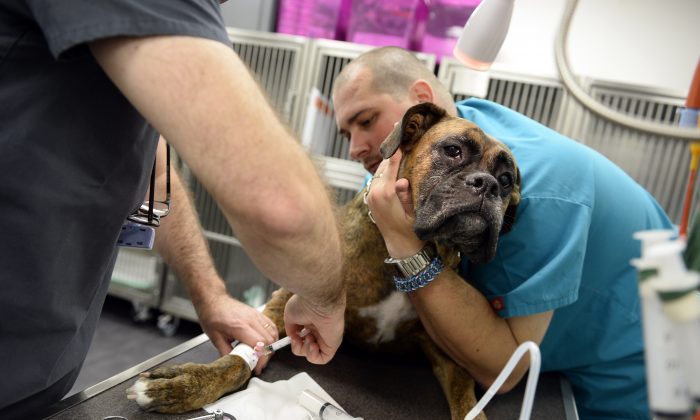 A dog is treated for cancer at a veterinary clinic Paris. (Lionel Bonaventure/AFP/Getty Images)
China-US News

4 Horrifying Reasons to Immediately Throw Out Pet Food From China

China does not have clear safety regulations or government oversight of the production of pet food made in their factories.

In a country where human food is often contaminated, both intentionally and unavoidably as a result of environmental pollution, it is unsurprising that “made in China” products have caused the deaths of many pets of American owners.

From 2007 to 2014, major pet food retailer PetSmart received more than 4,800 complaints of pet illnesses and more than 1,000 reports of dog deaths after unsuspecting owners gave their pets chicken, duck, or sweet potato jerky treats made in China.

The pet food retailer eventually decided to stop selling all dog and cat treats imported from China from March 2015 due to continuing safety concerns.

“I grabbed the bag of treats and turned it over,” one owner told ABC at the time, after stumbling upon the reason for the deaths of her two much-loved dogs.

“At first I saw it said ‘Manufactured in South Carolina’ so I thought I was safe. Then I looked harder and it said ‘Made in China’ and I just said ‘Oh no.'”

The U.S. Food and Drug Administration has been receiving complaints about jerky pet treats since 2007.

Many dog owners are unaware of the dangers of rawhide products.

“Rawhide is so dangerous and it’s shocking to me that this isn’t mainstream knowledge,” said Dr. Natasha Lilly, who works at Full Circle Veterinary Center in San Luis Obispo, California, according to the Chicago Sun Times.

“They’re not ‘raw’, by the way. They are highly processed and full of chemicals,” Lilly said.

“And they are not digestible so they can cause an obstruction, and if there’s an intestinal blockage, then emergency surgery is needed.”

Rawhide is processed through an acid and bleach solution during Chinese production, and the lax regulations in China amplifies the risk of poisoning for dogs.

Animal welfare advocates warn that chemicals in the products include mercury, arsenic, formaldehyde and chromium.

Add the fact that the vast majority of rawhide pet products come from China, and you have some very good reasons to never give your dog rawhide.

People who raise less conventional pets will be interested to know that melamine, a compound used to make plastics, is systematically added to different types of animal feed in China.

Melamine once sparked panic across China after melamine-tainted milk powder resulted in the deaths of at least six infants and sickened hundreds of thousands more.

A variety of toxic effects from ingesting melamine has been observed in animals, including kidney stones, chronic kidney inflammation, and bladder cancer.

Li, an employee of a Chinese animal feed company, revealed in a 2008 interview with NTDTV that the melamine discovered in eggs sold for human consumption in Hong Kong came from contaminated chicken feed.

Pig and cow feed have the highest concentrations of melamine, Li said, which is added by unscrupulous companies to boost protein content and save on expenses which would be spent on more expensive ingredients.

According to Chinese media outlet Southern China Metropolitan, the practice of contaminating animal feed with melamine started at least ten years ago, and affects every type of animal feed: cattle feed, sheep feed, poultry feed, pig feed and even the feed used in industrial fish farms.

In 2008, 16 dogs and cats were killed while thousands of others were sickened, leading to one of the biggest pet food recalls in the history of the United States. The incident involved big name companies like Procter & Gamble and Menu Foods.

Notably in the same year, other Chinese-made products including children’s toys and jewelry were also recalled.

“Somebody should be held responsible,” said William Howell, whose Japanese Spaniel suffered kidney problems and after eating the tainted foods, reported the New York Times.

“I don’t know if it’s Menu Foods or their distributor in China who put the ingredients in, but somebody should be held responsible.”

Howell, a retired resident of Florida, had his companion euthanized after being forced to watch her writhe in pain for days. He had not known that the moist food he bought for her as what he thought would be a better substitute to the dry food would result in her death.

Melamine was also the culprit in this case.