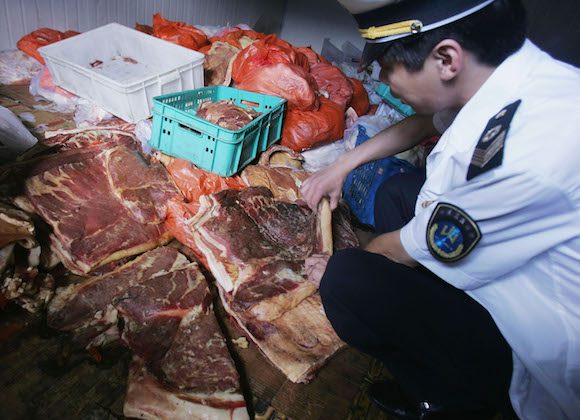 An officer with the Beijing Health Supervision Institute inspects spoiled pork at a freezer of the Huilongguan Chengbei Trade Market on July 28, 2005 in Changping County of Beijing, China. (China Photos/Getty Images)
China Society

9 Food Products You Should Never Buy From China

Bubble Tea enjoys great popularity in the United States, but it is best to avoid drinks containing tapioca pearls imported from China.

In 2012, researchers from Germany found polychlorinated biphenyls in the product. These chemicals are hazardous in a whole spectrum of ways. They are known to cause cancer, affect the nervous system, reproductive system, immune system, and endocrine system.

In one case, a reporter from a Shandong television station found that, upon undergoing a CT scan, the overly chewy tapioca pearls were left undigested in her stomach in the form of a “highly sticky” substance. After investigations, one unsuspecting bubble tea shop owner spilled the beans: the “pearls” were fashioned at a chemical factory from old tyres and the soles of leather shoes.

The problem of adulterated shrimp has persisted for over a decade, with new cases regularly emerging. These shrimp are injected with gel before they are sold to add weight and thus earn a greater profit.

Some of the first well-publicized cases of the gel-injected shrimp appeared in 2005.

In 2012, samples of shrimp purchased at thirty different grocery stores across the United States were tested. They were found to contain high amounts of antibiotics that are banned in the United States, such as carcinogen nitrofurazone and chloramphenicol.

China’s fake rice looks like the real thing, and in the last few years, at least 9 millions of tons of it has been imported to the United States.

It contains material similar to plastic, and according to reports, is made by mixing synthetic industrial resin with potatoes, which can have deadly results.

To identify fake rice, if it dissolves into boiling hot oil, you’ve got yourself a winner.

An abundance of pork in China has led to unscrupulous vendors pretending that their pork is actually beef. By chemically altering the pork with an extract, then glazing them to look like beef, the vendors leave consumers none the wiser.

Its consumption may cause poisoning over time, deformity, and cancer.

Similarly, dishonest vendors who find little profit in selling real mutton are disguising rat, mink, and fox meat with chemicals, and promoting them as mutton.

The practice was so widespread that in 2013, police seized 20,000 tons of fake mutton, and arrested more than 900 people—all within three months.

Reportedly 70 percent of wines produced in China are fake. Tourists are especially easy targets for crooked sellers of counterfeit wines that are stamped with expensive-looking labels.

These wines are normally made with cheap fruit juice.

It was discovered that almost 91 percent of the table salt coming out of China contained traces of heavy metals that increase the risk of a heart attack, stroke, hypertension, and high blood pressure.

These salts are originally produced for industrial purposes.

China’s baby formula comes cheap, but at what cost?

In 2008, six infants died, and more than 300,000 babies became ill due to baby formula containing melamine, a chemical compound used in plastic and fertilizer production.

Despite increased regulations, counterfeit formulas found their way into the United States in 2015, and were re-sold using recognizable brand names.

At the start of this year, a safety overhaul of the industry has resulted in the removal of 1,400 products from sale. The new regulations required baby formula products to be registered with the China Food and Drug Administration and pass safety inspections.

This popular soy product is considered a staple of vegetarian diets in particular.

In 2012, it was reported that food safety inspectors in the Hunan Province discovered that some manufacturers used livestock, iron sulphate, and even human feces to speed up the fermenting process.

Other foods potentially harmful to consumers include garlic, chicken, and fish that have been exposed to China’s polluted waterways, as a result of water runoff from industrial sites and waste treatment facilities, air pollution, and food-borne illnesses such as avian flu.