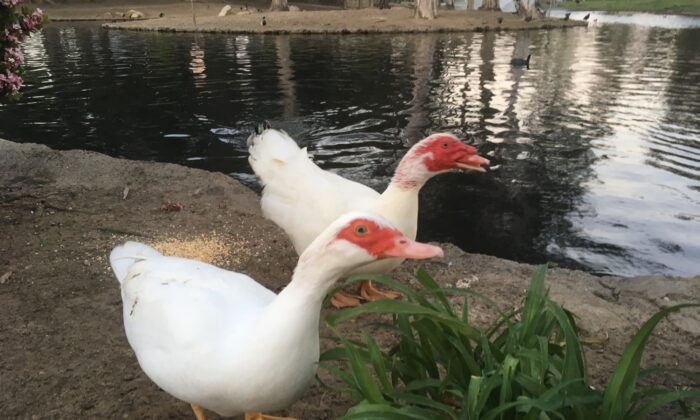 An undated photo of Muscovy ducks Grace and Mr. Chipper, which were found shot to death at TeWinkle Park in Costa Mesa, Calif., on April 18, 2022. (Courtesy of Wetlands & Wildlife Care Center)
Southern California

COSTA MESA, Calif.—Four ducks were found shot to death on the morning of April 18 at TeWinkle Park—often nicknamed the “duck park” by local residents—in Costa Mesa, California, and the city’s police department is still searching for the suspect.

“My initial reaction was to wonder how hollow and cruel the mind of the person is, who murdered these innocent animals,” Debbie McGuire, executive director of the non-profit, said in a statement emailed to The Epoch Times. “A shudder of fear and sadness ran down my spine.”

McGuire said that human-caused atrocities such as the killing of the four ducks happen almost every day, but “the magnitude of this senseless shooting makes it one of the more solemn events” witnessed in recent memory.

“It is very unfortunate because these are special animals,” Jaret Davey, a wildlife technician for the non-profit, told The Epoch Times. “I work here because I love these kinds of animals, and it’s so upsetting to see someone just, like, hate them.”

TeWinkle Park regular Michelle Berger, who saw the birds “alive and happy” just before sunset on Easter Sunday, said she “was in tears” upon her discovery.

The organization asks the community to contact the Costa Mesa Police Department with any information about the assailant.

“The assailant is shooting firearms in a neighborhood park,” said McGuire, executive director of the non-profit. “If they were to miss their target, a stray bullet could hit an innocent person or a passing car.”