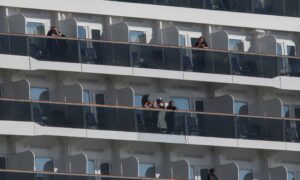 4 Cruise Lines Suspending Trips From US for 30 Days
0 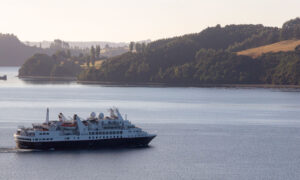 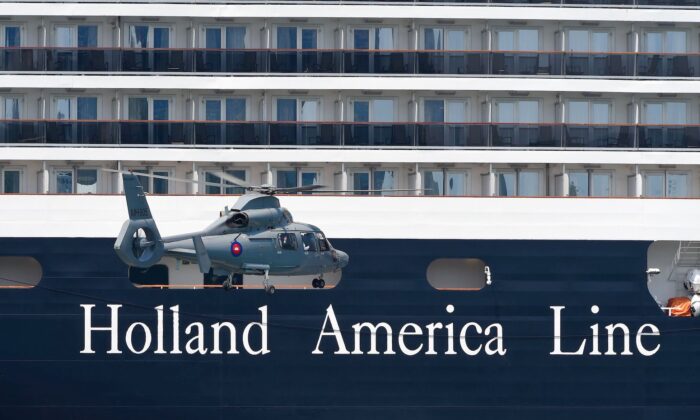 A helicopter prepares to land near the Westerdam cruise ship in Sihanoukville, Cambodia, on Feb. 19, 2020. (Tang Chhin Sothy/AFP via Getty Images)
WORLD

Holland America said that four passengers on a cruise ship bound for Florida that has more than 130 sick passengers have died.

The cruise operator didn’t say whether the deaths were related to the CCP virus outbreak.

“Holland America Line can confirm that four older guests have passed away on [cruise ship] Zaandam. Our thoughts and prayers are with their families and we are doing everything we can to support them during this difficult time,” the cruise line said in a statement on its website.

The ship was first allowed to disembark in Punta Arenas, Chile, but it was later denied, the operator wrote.

Holland America said 53 guests and 85 crew members reported flu-like symptoms, adding that 1,243 guests and 586 crew are on board. COVID-19 and influenza have similar symptoms.

An undisclosed number of patients were tested for the virus on Thursday. Two of them tested positive for COVID-19, the company said.

“Out of an abundance of caution, on March 22 when Zaandam first saw a number of guests reporting to the medical center with influenza-like illness symptoms, we took immediate protective measures, including asking all guests to self-isolate in their staterooms and implementing all other appropriate precautions that have been developed in coordination with the CDC. All guests and crew received face masks yesterday and were provided with instructions on when and how to wear them,” the company said.

The cruise liner said that it is working with Panamanian authorities on approval to travel the Panama Canal to Fort Lauderdale, Florida.

The Zaandam had departed Buenos Aires, Argentina, on March 7 and was slated to head to San Antonio, Chile, on March 21.

But “due to global health concerns, Holland America Line made the decision to suspend its global cruise operations for 30 days and end its current cruises in progress as quickly as possible so guests could return home,” according to the company. “No one has been off the ship since March 14 in Punta Arenas, Chile.”

Last month, the Diamond Princess cruise ship was held off the coast of Japan for several weeks during the outbreak, prompting the U.S. State Department to evacuate hundreds of Americans who were on board.