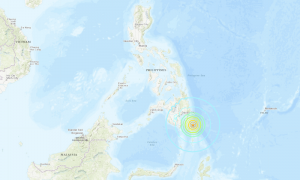 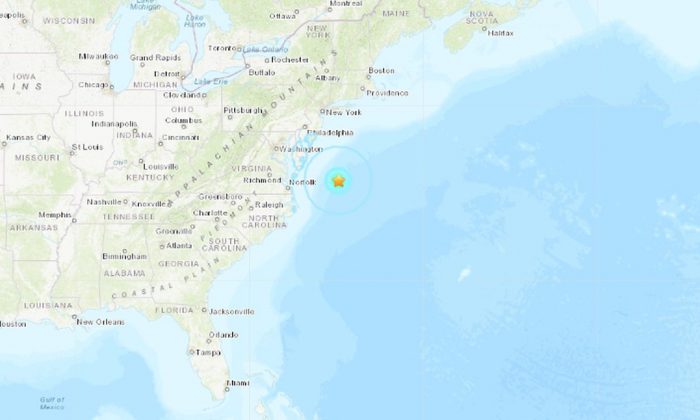 A 4.7-magnitude earthquake hit off the coast of Maryland, according to the U.S. Geological Survey (USGS).
US News

A 4.7 magnitude earthquake hit off the coast of Maryland, according to the U.S. Geological Survey (USGS).

The quake hit at around 6:30 p.m. about 136 miles east of Ocean City. The epicenter was located in the Atlantic Ocean, the agency said.

It had a depth of 6 miles (10 kilometers) the agency said.

There was no tsunami and no chance of a tsunami, the USGS said, reported CBS Baltimore.

A few dozen people reported feeling the quake around Maryland and Virginia after it hit. People in Virginia Beach and Ocean Pines, namely, felt the tremor, CBS reported.

The town of Ocean City issued a statement about the matter.

“The Town of Ocean City is aware of an earthquake that took place in the Atlantic, approximately 130 miles off shore and nearly 6 miles deep. Although we have seen no effects here, our Emergency Services Department has been in contact with our State partners and will be monitoring as needed,” the town wrote.

The Earth’s crust around the U.S. East Coast is more rigid than other places, said Jana Pursley, a geophysicist for USGS, reported Delmarva Now.

The Town of Ocean City is aware of an earthquake that took place in the Atlantic, approximately 130 miles off shore and…

And that is why, she said, earthquakes tend to be felt from longer distances than those that occur off the West Coast of the United States.

Pursley said it is unlikely the 4.7 magnitude quake did any damage. By the time the seismic waves traveled through the water to land, the shaking had weakened, she said.

National Oceanic and Atmospheric Administration said at 7:30 a.m. on Jan. 16, that it didn’t report any tsunami activity associated with the earthquake, according to the report.

The last significant earthquake in the area was Nov. 30, 2017, when a 4.1 magnitude tremor it about 10 miles from Dover, Delaware.

In 2011, a 5.8 magnitude quake struck the Delmarva Peninsula and the East Coast.

*UPDATE: According to the Maryland Geological Survey, the earthquake occurred on the outer continental shelf at 10kM depth. https://t.co/6ji8ufpLj1

That quake, according to reports at the time, hit Washington D.C. and was felt in New York City.

The quake did damage to the Washington Monument and forced its closure until 2014 amid repairs.

” The answer is one that many people may not realize. Earthquakes east of the Rocky Mountains can cause noticeable ground shaking at much farther distances than comparably-sized earthquakes in the West,” says the USGS.

The 5.8 quake was felt as many as 600 miles away and was felt by “tens of millions of people in the eastern United States and southeastern Canada,” the agency says.

It adds: “For comparison, a magnitude 6.0 earthquake in 2014 in Napa, California, was felt only as far as 250 miles from the epicenter. Despite the Napa earthquake releasing about twice as much energy as the Virginia earthquake and causing much more damage near the epicenter, it wasn’t felt nearly as far away.”