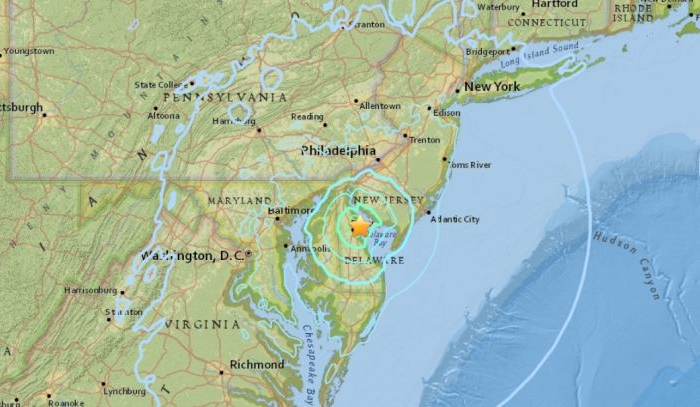 An earthquake was felt along the East Coast of the United States, including in the New York City area, on Thursday afternoon. (US Geological Survey)
US News

An earthquake was felt along the East Coast of the United States, including in the New York City area, on Thursday afternoon.

The U.S. Geological Survey says that a 4.4-magnitude earthquake struck near Dover, Delaware, at around 4:47 p.m. local time. It had a depth of about 4.3 miles.

There’s so far been no word on whether there were injuries or if there was damage caused.

The USGS downgraded the quake from a 5.1 to a 4.4 on the Richter scale.

On Twitter, the hashtag #earthquake was trending. Hundreds of people said they felt it.

Nice that we have Twitter so I can that confirm I didn't just have a stroke. #earthquake

Devastating photo of damage caused by the #earthquake … Philadelphia needs your prayers. pic.twitter.com/mAWBpdWJYr

DID YOU FEEL IT? It lasted only a moment but it seems an earthquake just rattled Baltimore and beyond! #MarylandQuake #earthquake

Was that just an #earthquake, or did my entire house just shake for another reason?! #philly

Anyone else feel that? #Earthquake