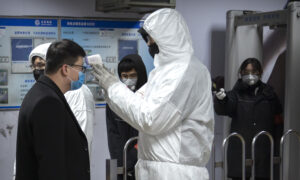 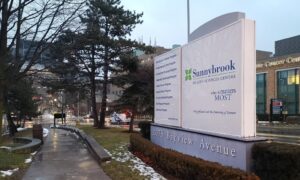 The logo of 3M is seen at the 3M Tilloy plant in Tilloy-Lez-Cambrai, France, on Aug. 18, 2019.(Reuters/Pascal Rossignol)
Business

Shares of industrial giant 3M tumbled by over 5 percent Tuesday after the company announced lackluster corporate earnings figures that included a drop in year-on-year profits of 28.1 percent amid weak demand from China.

According to 3M’s income statement (pdf) published on Jan. 28, the company’s year-over-year non-adjusted earnings per share (EPS) fell by 26.9 percent. The adjusted EPS fell by 15.6 percent.

The company said it adjusted some of its figures for reasons that included accounting procedures related to the Tax Cuts and Jobs Act and “for impacts of significant litigation-related charges.”

Gross profit for the same period fell by 2.5 percent to $3.79 billion.

“We expect investors to generally be disappointed with the print, guidance, and the new PFAS-related charges, while rapidly advancing Coronavirus concerns ultimately could pull the rug out from under the Asia recovery story,” Gordon Haskett analyst John Inch told Reuters.

Sales in Asia-Pacific fell for the fifth straight quarter, hurt by sluggish demand from China’s automotive and electronics sectors, forcing the company to cut jobs and production last year. China’s economy grew at its slowest pace in almost three decades in 2019 amid a trade dispute that hit factory production, while auto sales slumped for the 18th straight month.

3M CEO Mike Roman said in a post-earnings call cited by Reuters that he was looking at a “sluggish start” in China in the first quarter, based on forecasts that the automotive business would decline.

“We were looking at a sluggish start to China in the first quarter … based on automotive, and the build rate’s expected to be down mid-single digits and maybe even high single digits,” Roman said.

The company also disclosed it had been subpoenaed in Alabama regarding inquiries into PFAS-containing waste, which can cause health problems.

Roman also said on the call that the recent coronavirus outbreak in China was causing a spike in demand for respiratory masks, which 3M produces.

Later, speaking on CNBC’s “Squawk on the Street,” he said the company was increasing the production of respiratory protection products that people wear to prevent infection by the deadly virus.

“We are ramping to full production. We’re going 24/7,” Roman said, noting that the spike in production would affect 3M plants across the board, including in both China and the United States.

Coronavirus has now spread to 14 countries, with nearly 4,700 confirmed cases and over 100 deaths.