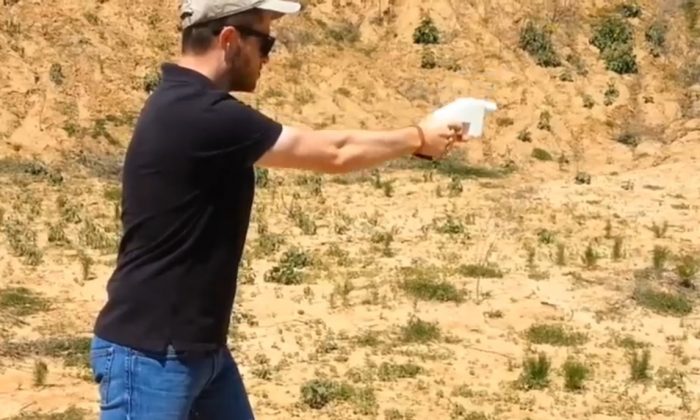 A demonstration of the first working gun, called the Liberator, produced through 3-D printing technology by Defense Distributed, a "Wiki weapon project." (Screenshot via The Epoch Times)
12- OBSOLETE

3-D Printing Gun: Dangers and Benefits of the Technology (+Videos)

Defense Distributed calls itself a “wiki weapon project.” On May 4, its founder, Cody Wilson, successfully fired a gun made of plastic parts produced by a 3-D printer purchased on eBay. Wilson intends to make instructions for building the gun widely available online.

The group takes as its manifesto the 1644 “Areopagitica; A Speech of Mr. John Milton for the Liberty of Unlicenc’d Printing,” made to England’s Parliament. The Areopagitica defends freedom of speech and expression.

In a short documentary film published by Motherboard on March 25 (see video below), Wilson, 25, discusses the implications of enabling the general public to make weapons with 3-D printing. 3-D printing uses a variety of materials (usually plastic) to “print” an object from computer designs. A synthetic resin is irradiated and hardens layer by layer.

“If we gave it away, opensource style, what would that mean?” asked Wilson, referring to the design information needed to produce a gun. He said the idea “is really attractive.”

He said people ask him about the massacre at Sandy Hook Elementary School in Newtown, Conn.; they ask whether he’s worried about putting guns in the hands of people who could commit such crimes.

In relation to the topic, he brought up the Second Amendment, but noted: “I don’t like to make it about the Second Amendment or gun control. … It’s more radical for us, like there are people from all over the world downloading our files, and we say, ‘good.’ We say, ‘You should have access to this.’”

His gun, which was still in the experimental phase at the time the documentary was filmed, included some parts ordered online. Referring to one of the parts, he said, “If you’re 12-years-old, you can buy it online, which I think is a thing of beauty.”

Wilson, who is a law student at the University of Texas, focuses on printing AR-15 low receivers,  explained Motherboard. This is the part classified as a firearm by the U.S. government, whereas some other parts can be ordered online without restriction.

He also said, “What’s great right now about America, is you can buy ammunition online.” The plastic gun can fire real bullets, and as New York Sen. Charles Schumer, pointed out during a press briefing on May 5, it can pass through metal detectors.

Defense Distributed intends to make its designs suited to the cheapest 3-D printers available. The printer used for the gun successfully fired on May 6 cost about $8,000, according to the BBC.

Many researchers in the 3-D printing industry did not believe a working weapon could be manufactured with the technology—or at least not with the form currently available to consumers.

In an article published in The Epoch Times in February of this year, experts Robert Gorkin, research fellow at University of Wollongong in Australia, and Thomas Birtchnell, a lecturer at the University of Wollongong, said the plastic could not withstand repeated firing. They said 3-D printing with metal is possible, but it is very dangerous and can only be done in a controlled environment.

“In some ways it would be far easier to make a weapon using traditional methods and it is possible to find aspirational gunsmiths making firearms at home,” they wrote.

Victoria Baines, from Europol’s cybercrime center, agrees. She told the BBC that criminals are more likely to use traditional methods of obtaining firearms, “But as time goes on and as this technology becomes more user friendly and more cost effective, it is possible that some of these risks will emerge.”

Wilson’s actions were legal in the United States. He obtained a gun license, and the manufacture of guns for personal use is permitted.

Birtchnell and Gorkin hope the potentially malicious or illegal uses of 3-D printing will not overshadow the many benefits the technology could bring. “Guns will be far from the most innovative object to emerge from the build tray of 3-D printers in the foreseeable future,” they wrote.

The technology could revolutionize manufacturing, infrastructure, robitics, medicine, and more.

A statue of Thomas Jefferson was reproduced using 3-D printing; the plastic was finished with a faux bronze sheen, and it was put on display at the National Museum of American History in Washington, D.C., in 2012. Adam Metallo and Vince Rossi are working on digitizing Smithsonian collection for 3-D printing reproduction.

“Our mission is to digitize these huge collections in 3-D—everything from insects to aircraft,” Rossi said in an interview with the Spar Point Group last year. It could allow the museum to share it’s collection with other museums around the world, and it could help researchers work on fragile samples of bone, fossils, and more.

UPDATE:  Birtchnell and Gorkin wrote a joint statement, received May 8, in response to an inquiry from The Epoch Times:

“At the moment the intense media interest in the 3-D printing of guns appears to derive from speculation on the potential social impacts of this innovation: what might different futures be like in which firearms could be 3-D printed? This is the question now springing to many people’s minds and triggering debate.

“Ideologies about regional government restrictions on firearms also play a part here. This latest release further claims a fully-printed gun is getting closer. In this case it is being described by some as a ‘zip gun’—assembled from many separately printed plastic parts and using a non-printed metal firing pin and non-printed metal bullets.

“The printed plastic parts were made on a used 3-D printer that retails higher than $10,000. The assembly was also treated afterwards to make the plastic stronger and at this point, without any information on the accuracy or safety of the device, it is difficult to comment on whether a fully assembled, functional and reliable firearm will ever be 3-D printed.

“With such grassroots efforts open and intelligent debate is essential, involving both experts and the public; however, 3-D printing guns represents a small fraction of the potential for this technology. There is no doubt that 3-D printing could revolutionize the world and alongside guns we are reminded daily of stimulating concepts like planning to print buildings on the moon; the printing of organs, body-parts and cells; and the mixing of novel exotic materials to make circuits. All of these ideas stem from the same excitement.”