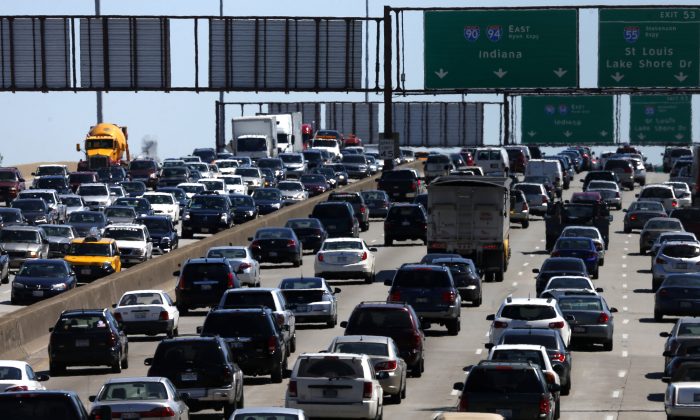 FILE - In this May 24, 2013 file photo, traffic begins to thicken as motorists getting an early jump to Memorial Day destinations in Indiana and Michigan travel an interstate freeway through Chicago. Auto club AAA on Friday, May 16, 2014 said it expects a total of 36.1 million people to travel 50 miles or more this Memorial Day Weekend. If that estimate holds true, it would be the largest amount of people traveling during the holiday weekend since 2005. (AP Photo/Charles Rex Arbogast, File)
US

Memorial Day weekend 2016 is set to be a record breaker—with 38 million Americans projected to be on the road.

“The great American road trip is back,” said Marshall L. Doney, president and CEO of the American Automobile Association (AAA).

But, he advised, “Pack plenty of patience.”

If the AAA’s Travel Forecast is correct, 2016 will be the second highest Memorial Day travel volume on record. And the highest in 11 years, since 2005.

The current national gasoline prices are sitting at an average of $2.26 per gallon—50 cents less per gallon than a year ago—which also makes them the lowest in 11 years for the weekend.

AAA estimates Americans will save, collectively, $150 billion dollars on gas in 2016. Which is circa $700 per driver.

While 2016 will most likely break records, 2015’s numbers were nothing to sneeze at. American’s drove a record 3.1 trillion miles last year; the equivalent of 1 billion cross-country road trips.

For 2016, the majority of Memorial Day travelers will be driving. The nearly 38 million drivers will see 700,000 more individuals on the road than in 2015.

These all time high driving levels are expected to continue through the summer season.

AAA also predicts a slight increase in air travelers from 2015. About 2.6 million individuals are projected to taken advantages of lower airfare prices.

Other forms of travel—such as bus, train, or boat—are estimated to be used by 1.6 million travelers.

The major motivating factor, however, seems to be low gasoline prices.

Doney notes that a recent AAA survey indicates that 55 percent of Americans are more likely to take a road trip due to lower gas prices.