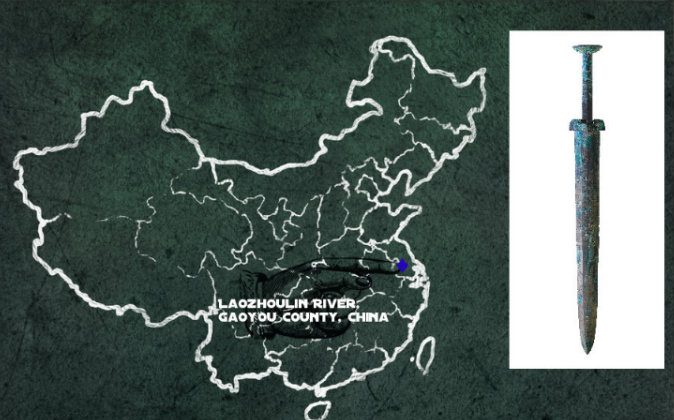 An 11-year-old boy was washing his hands in the Laozhoulin River in Gaoyou County, China, when he felt something hard and metallic. He pulled out the object and found that it was a rusty sword, now identified as a 3,000-year-old ancient sword made from bronze. According to the news release in IBN Live, the relics bureau and municipal museum of Gaoyou City have sent a reward to the boy and his father in honour of their deeds of protecting and donating the cultural relic.

After fishing the sword out from the river, 11-year-old Yang Junxi took the relic home to his father, Yang Jinhai. As news spread around their town, locals began flocking to Yang’s home, with some offering high prices to purchase the artifact. However, Jinhai felt it was best to preserve the sword for its cultural value and sent it to the Gaoyou Cultural Relics Bureau.

The bureau organized a team of local cultural relics experts to identify the sword. Initial identifications found that the 26cm-long bronze sword could be dated back to around the time of the Shang and Zhou dynasties, more than 3,000 years ago, which is among the oldest swords ever recovered – the first bronze swords are believed to have first been developed in China around 3,200 years ago.

Sword production in China is believed to have started during the Bronze Age Shang Dynasty, from around 1200 BC. The technology for bronze swords reached its highpoint during the Warring States period and Qin Dynasty (221 BC – 207 BC). During this period, some unique technologies were used, such as casting high tin edges over softer, lower tin cores, or the application of diamond shaped patterns on the blade. Also unique for Chinese bronzes is the consistent use of high tin bronze (17-21% tin), which is very hard and breaks if stressed too far, whereas other cultures preferred lower tin bronze (usually 10%), which bends if stressed too far. Although iron swords were made alongside bronze, it wasn’t until the early Han Dynasty that iron completely replaced bronze, making China the last place where bronze was used in swords.

According to Lyu Zhiwei, head of the cultural relics office of the bureau, the newly-discovered sword, which does not contain any decorative patterns, is an example of a bronze short sword, which was often used by civil officials for decorative or status reasons. Swords of this period were typically made from bronze with high tin content for the cutting edge and bronze with low tin content for the spine, resulting in a sword with hard and durable cutting edges and a flexible spine to absorb shock. There was also extensive use of copper sulphides as anti-corrosion coatings.

The sword is the second ancient bronze artifact to have been recovered from the Laozhoulin River in recent years. The river connects to China’s Grand Canal, which is the world’s longest artificial waterway with a history of more than 2,400 years.  Archaeological excavations of the river and nearby areas are planned for the future.