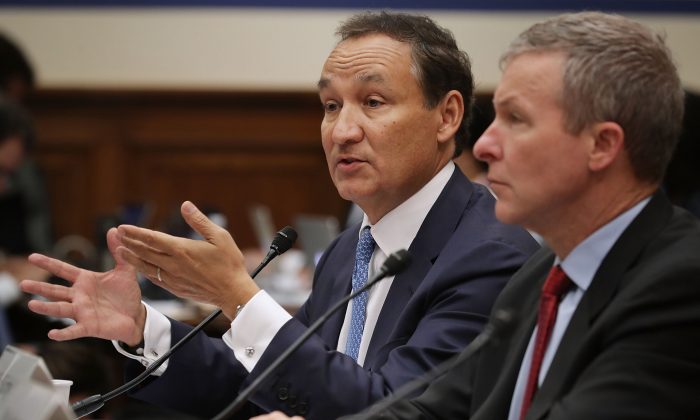 United Airlines is canceling near-term flights amid a surge in COVID-19 infection cases resulting in almost 3,000 employees calling in sick as a recent memo from the company’s chief executive upheld its stance on vaccine mandates.

“In addition to impacting our operation and our customers, I also know that Omicron has affected the personal well-being of our United team,” United Airlines Chief Executive Scott Kirby said on Jan. 11. “We have about 3,000 employees who are currently positive for COVID. Just as an example, in one day alone at Newark, [New Jersey,] nearly one-third of our workforce called out sick.”

The company canceled 154 flights, or 7 percent, and delayed 152 flights on Jan. 11, according to data from FlightAware. Southwest Airlines had 142 cancellations and 171 delays.

United has reduced the effect on customers by canceling flights ahead of them coming to the airport, according to Kirby. However, the recent staff shortages have resulted in a further trimming of schedules.

Kirby claimed that since the vaccine mandates were rolled out, the hospitalization rate of vaccinated employees, which make up 96 percent of the total workforce, is about 100 times lower than that of the general population in the country. None of the 3,000 COVID-positive workers are reportedly hospitalized.

Many airlines had to cut flights due to Omicron coronavirus variant-related staff shortages and the inclement winter weather. United had reduced its schedule in December 2021. As for January, JetBlue Airways was one of the first to cut down on flights. American and Alaska Airlines followed suit, citing the high number of COVID-19 cases.

United also fired roughly 200 employees in the United States in December 2021 who didn’t comply with the vaccine mandate.

The airline offered pilots triple pay to continue flying through January, as the number of pilots came down considerably at the end of December 2021. Southwest Airlines, similarly, increased its pilots’ pay to avoid disruptions.

The Omicron variant is currently the dominant strain of the CCP (Chinese Communist Party) virus in the United States, affecting more than 95 percent of the infected. International studies have shown that the strain displays mild symptoms and affects patients less severely when compared to the Delta coronavirus variant.

Based in Chicago, United employs about 96,000 people worldwide, including 67,000 from the United States. It isn’t clear whether the COVID-19-positive employees were from the country.

The company’s stock has fallen more than 26 percent from its 52-week high of $63.70 with the latest earnings report scheduled to be released on Jan. 19.