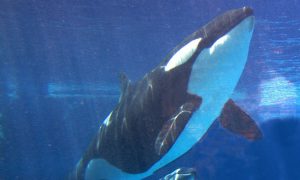 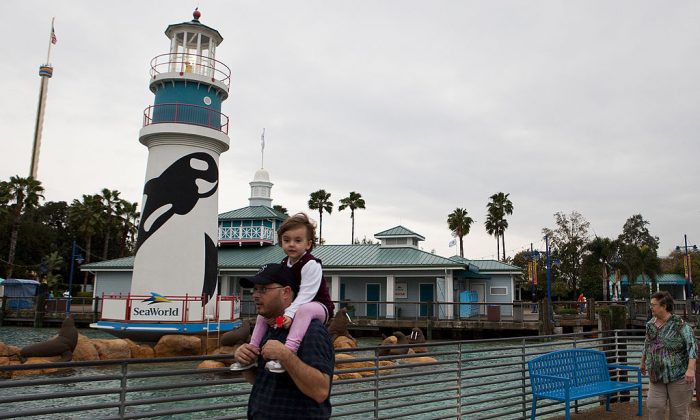 Guests exit the park at the end of the day at SeaWorld in Orlando, Florida on Feb. 24, 2010. (Photo by Matt Stroshane/Getty Images)
US News

30-Year-Old SeaWorld Orca Dies at a Young Age: ‘Not Normal’

After SeaWorld announced that a 30-year-old orca, Kayla, died on Jan. 28, an animal advocate said that it’s not typical for killer whales to die so young.

For an orca, “30 is prime of life,” Dr. Naomi Rose, a marine-mammal scientist at the Animal Welfare Institute who has been critical of SeaWorld in the past, told the Orlando Sentinel.

“That’s like literally being a 30-year-old woman. Dying at 30 is not normal,” she added.

A 1995 study published in “Marine Mammal Science” showed that orcas in captivity had a mortality rate 2.5 times higher than orcas in the wild, according to the Animal Welfare Institute. A 2015 re-examination of the issue confirmed that captivity shortens the lives of orcas on average.

“Survival of captive killer whale cohorts has generally improved through time, although survival to age milestones are poor when compared to wild killer whales,” study researchers John Jett and Jeffrey Ventre wrote in the abstract.

SeaWorld announced the death of Kayla in a statement sent to news outlets. The statement was not published on SeaWorld’s website or through its social media channels.

Theme park officials said in the announcement that Kayla began showing signs of discomfort on Jan. 26 and died on Monday morning, reported WKMG.

The orca had undergone a physical exam as animal care specialists tried to fix whatever was bothering her, SeaWorld said.

“While today is a difficult day for all of us at SeaWorld, Kayla inspired generations of guests and employees to care and learn more about this amazing species,” read the statement.

The reason for her death is not known, and an autopsy is planned to determine the cause.

PETA was among the groups highlighting the death, stating: “Kayla never got to swim in the ocean and lost her babies. No orca should ever have to live like this.”

BREAKING: Kayla, an orca trapped at #SeaWorld her entire life, has DIED in a tank at the #Orlando abusement park. She never got to swim in the ocean.

Kayla was forced to move around the country from park to park & heartbreakingly lost babies over the years ???? pic.twitter.com/DClMYXJmKg

Orcas have been a huge draw since being introduced at SeaWorld but the company was slammed after the 2013 documentary “Blackfish” was released.

The movie examines the death of a trainer at SeaWorld Orlando and critically probed whale captivity as a whole, casting it in a negative light.

Attendance dropped at SeaWorld, and the company struggled financially as other parks, including Universal Orlando, expanded and added new attractions, reported the Sentinel.

In recent years, the company has moved away from orcas. In 2016, about three years after “Blackfish” was released, former CEO Joel Manby announced the halt of SeaWorld’s breeding program and said that SeaWorld’s theatrical orca shows would end in 2019.

SeaWorld will turn its attention to “new, inspiring, natural orca encounters” with educational programs emphasizing enrichment, exercise, and health with its remaining killer whales, Manby told reporters on a conference call, according to USA Today.

“Today marks a bold and impactful shift for our company,” Manby said. “The killer whale issue is a growing reason why many people don’t visit SeaWorld and this is about doing the best thing for our orcas, our guests, our ambassadors, and our company.”

SeaWorld has since put more emphasis on its rides and added several new other attractions as its attendance and finances improved across 2018.