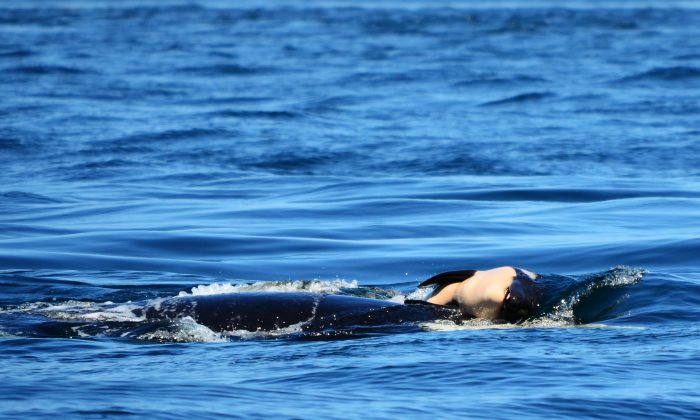 In a tremendous display of grief and maternal instinct, a mother killer whale continues to keep afloat the body of her deceased calf in the waters off the Pacific Northwest.

The orca, named J35, or Tahlequah, has been carrying her dead calf since it was born on July 24. The calf only lived a few hours, the Seattle Times reported.

After it died, Tahlequah refused to let it sink to the bottom to be eaten by predators. Instead, she kept the calf afloat, pushing it with her forehead while heading east from the southeast tip of Vancouver Island, British Columbia toward San Juan Island, USA, north of Puget Sound.

At sunset, a group of about half a dozen female orcas gathered near the mouth of San Juan Island’s Eagle Cove, a resident reported to the Center for Whale Research. This group took turns keeping the dead baby orca afloat, and kept the baby in a patch of moonlight on the ocean for about two hours.

“As the light dimmed, I was able to watch them continue what seemed to be a ritual or ceremony. They stayed directly centered in the moonbeam, even as it moved,” the resident reported.

According to the Center for Whale Research, “Killer whales and dolphins have been known to support and transport their dead calves for as long as a week—a testament to the amazingly strong mother/offspring bond and caring.”

Some scientists are worried that Tahlequah might not take care of herself, consumed by her grief for her lost child

“I am so terrified for her well-being,” Deborah Giles, research scientist for University of Washington Center for Conservation Biology and research director for nonprofit Wild Orca, told the Seattle Times. “She is a 20-year-old breeding-age female and we need her.”

As of July 31, Tahlequah was still transporting her lost offspring.

The southern resident killer whale is a species perilously close to extinction. Currently about 75 members live in three pods which hunt for fish, mainly salmon, in the Pacific Ocean west of Washington and British Columbia. This number is down from 81 in 2015, counted by the Center for Whale Research.

Before being listed, the whales faced the threat of humans hunting them for theme parks. Between 1965 and 1975, a total of 45 orcas were captured and sent to aquariums around the world while at least 13 additional orcas died during the capture process, according to the website, Global Animal.

After that, humans continued to be the greatest threat to the cetaceans, despite southern resident killer whales being listed as an endangered species.

The chief problem the whales face is starvation, followed by poisoning from pollution.

The whales feed primarily on the endangered Chinook salmon, which are themselves growing frighteningly scarce in the wild. Overfishing has decimated Chinook populations, and the damming of rivers for hydroelectric power and flood control has interfered with the fishes’ breeding cycles. Farm-raised fish don’t develop enough fat to be a substitute.

Worse still, Chinook salmon, like the whales themselves, live close to the shore and near several dense urban areas. Pollution from these cities concentrates in the fat of the fish, and then into the flesh of the whales. Since the whales sit atop the marine food chain, everything which absorbs pollution, form the smallest plankton to mollusks, small fish, bigger fish, transfer these industrial pollutants up the chain—to the whales.

The whales store these concentrated doses of chemicals like DDT, mercury, and PCBs in their blubber, which weakens their health and causes reproductive problems, the same as it would in humans.

Normally half of all orca calves will survive to adulthood, but a study by the University of Washington found that two-thirds of orca pregnancies between 2007 and 2014 had failed.

Eleven calves were born in 2015 in a “baby boom” which temporarily gave scientists hope that the species might rebound. Half of those calves died as well.

There has not been a single successful pregnancy and birth in the past three years.

The Center for Whale Research estimates that the females of the existing population have about five years of fertility left. If they cannot produce healthy offspring in that time, the species will go extinct.

The only way to prevent the loss of this species might be the total revamping of salmon management and river management in the Pacific Northwest. As the American Fisheries Society notes in its “Salmon 2100″ report, “sometimes uncomfortably radical” policy rethinking will be needed if there is to be a wild salmon population by the year 2100.

Unfortunately, the whales don’t have time for protracted policy debates.

Sad sights like the video of Tahlequa trying to hang on to her lost infant might become commonplace—and then the only news of the whales will be when their corpses occasionally wash up on shore.