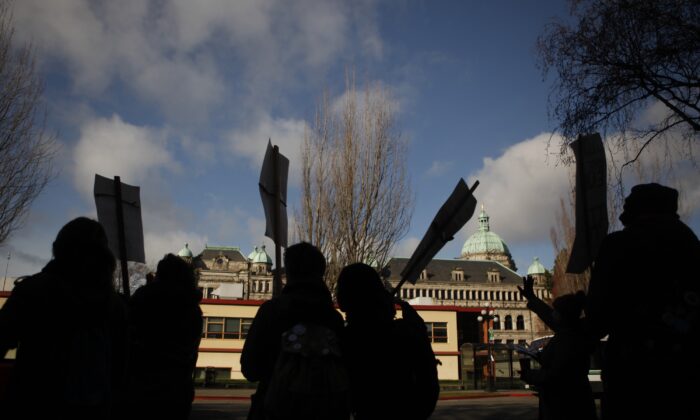 RCMP officers were confronted by a group of roughly 30 protesters who blasted air horns and kicked and damaged a cruiser near Houston, British Columbia, on July 26.

The officers were conducting a routine patrol on the Morice River Forest Service Road when they stopped a vehicle that had been the subject of multiple complaints from the previous week, according to a police statement issued on July 28.

While the police were interacting with those in the vehicle, one male passenger started to continuously blast an air horn toward the police in an attempt to stop the investigation, the statement said. He was subsequently arrested and charged with mischief and obstruction, but as the man was being placed in the back of a police car, roughly 30 protesters from a nearby camp used their vehicles to block the police car.

Several individuals climbed onto the police car, rocking it, while another kicked the car, as others tried to help the man escape.

The protesters dispersed and returned to their camp when additional police reinforcement was called from RCMP detachments in Houston, Burns Lake, and Smithers. The police were then able to transport the arrested man to the Houston RCMP detachment. The man was later released without conditions.

Chief Superintendent John Brewer praised the officers at the scene, saying that “they displayed excellence in de-escalating a serious situation after being surrounded by a disorderly crowd.”

“The officers are trained to ensure that everyone’s right to engage in lawful, peaceful, and safe protest is protected. However, situations like these when attempts to intimidate and harass the police while executing their duties will not be tolerated. Violence is criminal and we will take action against anyone participating in these unlawful practices,” he said.

Several protesters went to the Houston RCMP detachment to support the arrested man, including a woman who the police suspected to be the same person that “consistently banged on a drum directly into the ear of a police officer.” She was also thought to be the one who kicked and damaged the police vehicle during the confrontation on the forestry road. She was arrested and charged with assaulting a police officer and mischief.

The police said the woman was later found to be a different person from the one responsible for the mischief in damaging the police vehicle, who they are still searching for.

Both the arrested man and woman are scheduled for a court appearance on Oct. 24.

The protesters were reportedly attendees of a four-day event at the Gidimt’en camp near the location where their confrontation with the RCMP officers occurred. The event, held by Wet’suwet’en hereditary chiefs, sought to invite indigenous leaders, politicians, and environmentalist groups to join in their opposition of the Coastal GasLink (CGL) pipeline, reported The Narwhal,

CGL’s Morice River drill pad site is also situated in the area, where a violent assault of the company’s staff and facilities occurred earlier this year.

On Feb. 17, the RCMP received a call from CGL security at the drill site, which was reportedly being attacked by 20 people armed with axes. The assailants attacked security guards, smashed windows, and left “significant damage” to heavy machinery, fencing, and portable buildings.

CGL is working on a 670-kilometre pipeline construction project that cuts across Wet’suwet’en First Nation traditional territory in northwestern B.C. CGL said the project has the full support of the elected leadership of every indigenous group along the line, though it is opposed by the Wet’suwet’en hereditary chiefs and environmentalists, who want it abandoned.

In the past three years, RCMP has enforced three court orders against blockades set up by the chiefs and their supporters against the pipeline project.

The company said in a July 28 statement that the project was 66 percent complete overall and is expected to reach 70 percent overall completion by the end of this summer.