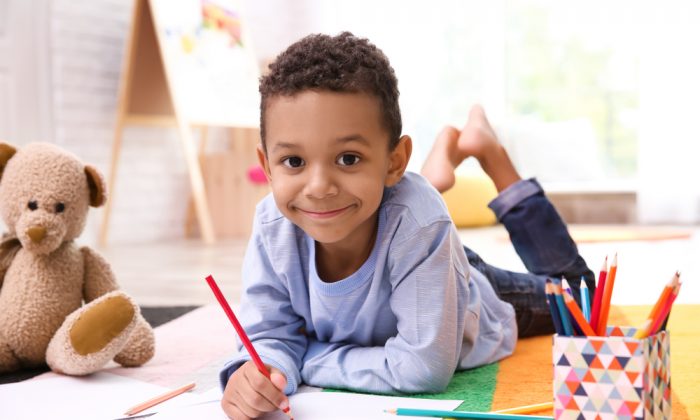 Drawing can help children break through blocks that are stopping them being their best, according to children's book illustrator Lyn Kriegler. (Africa Studio/Shutterstock)
Education

3 Ways That Drawing Helps Children Be Their Best

AUCKLAND, New Zealand—We all learn differently. If your child is struggling to learn or if you find his or her behavior is sometimes a challenge, getting that child to practice some form of art could be the answer.

I caught up with children’s book illustrator and oral storyteller Lyn Kriegler, a friend I’ve known for a number of years. I wanted to learn more about her work in New Zealand schools, where since 1990 she’s been leading workshops as part of the New Zealand Book Council’s “Writers in Schools” program.

Having illustrated 155 children’s books to date, Lyn knows a thing or two about children.

Around six years ago, I was lucky enough to help out ringside, as it were, at one school Lyn was visiting. She entertained a number of classes one after the other with equal gusto, showing the children her books and original illustrations along with illustrating their names and some impromptu storytelling. The children and I were part of the story, helping all manner of puppets come to life for their moment on stage, such as a lion, an orangutan, and an elephant.

In that classroom, there was a whole heap of joy, laughter, and of course creativity, and it all emanated from Lyn’s stories and art.

I then realized that children resonate with Lyn because she has a similar awe and avid curiosity of the world and because she greets them in a nonjudgmental way.

I wondered if we could learn from her work to help children.

The essence of that workshop stayed with me. Recently, as I sat around the kitchen table with my friend Corinne, Lyn, and her husband Tom, we all sipped tea as we listened to Lyn pour out story after story.

Lyn told us of the time she was invited to give a workshop at one of the lowest-achieving schools in New Zealand.

One of the boys was particularly challenging. He was three years behind in school and a big boy in a class of little kids. The school was at a loss as to what to do with him. He was kicking walls and punching holes in doors. He was full of anger.

“In came this spitball, fireball, big, tall boy. He was mad; you could tell he was angry,” Lyn said.

She got the kids to do a visualization exercise in order to draw something or create a story. She started the visualization with an extra deep breath. Everyone else relaxed. He just sat there. He was so tense. At first he couldn’t see anything. Then, with some coaxing, he suddenly saw a tiny dot of light.

“Can you draw that?” Lyn asked. He took a pencil and stabbed the paper so hard that the point went right through the page. “Good,” Lyn said. “Let’s see if you can just touch the paper with your pencil very gently like a spaceship coming to land.”

It took him about 10 tries before he could touch that paper without puncturing it. Then, with a burst of excitement, he chose a corner of the room and Lyn went through the process again. At first, she said, he was breathing like a bull. Then he began to relax.

The key is to “encourage them in a low voice,” she says. “It’s the tone of your voice that relaxes them.” Lyn never pats or touches the children.

Lyn told his teachers that at lunchtime they needed to give him a desk with some art supplies, and allow him to do visualization and let him draw.

“Let him ponder out what he sees within him because it’s all there, and once he’s rediscovered that world, he won’t need to wreck this world,” she said.

In her workshops, Lyn teaches the children to illustrate letters in a particular way; it’s a technique that can be used for learning numbers too.

She developed the method when she was at school herself. As a child, she found learning the alphabet boring, so she made it fun by drawing. She’d draw an “a” on its side and it became a peacock. She found that when she turned a capital “A” upside down, it became an ice cream cone. Or she’d add two small circles to the end of an “A” to reveal a pair of scissors. She did this for the entire alphabet.

Some of the schoolchildren she teaches are refugees who have settled in New Zealand from a war zone, such as Afghanistan. Their native language may be written in an Arabic script with rounded edges. “They don’t like the look of English letters because they’ve got sharp edges,” Lyn said. Understandably, they are afraid of being hurt. Even the innocent dot of an “i” can be traumatic, reminding them of crawling bugs, she said.

In her workshops, Lyn shows these children how to draw a picture or tell a story using the letters in their name. She first demonstrates how “Lyn” becomes a cat: The “y” becomes the cat’s nose, the “L” is a paw, and the “n” is another paw. And the children get it. Suddenly they see that they can turn a letter of the alphabet into any kind of drawing. “Their chin goes up and their eyes start to sparkle,” Lyn said.

“When they see they can make a drawing out of it [a word or a letter], they’ve broken through that block that’s stopping them,” she said. Then they all want her to illustrate their name. But Lyn is firm: “I say no. Go back to your classroom and you try this [yourself].”

Often after a storytelling session, particularly when her puppets have been involved, children will approach Lyn and pour their hearts out to her.

On one occasion, a little boy approached her and told her that his dad said he was destructive. He was so sad about it. He said, “My dad works really hard to buy me toys, and I like electrical toys, things that you can plug in or wind up. But I want to find out how they work, so I take them apart, and I can’t put them back together again. My dad gets mad at me and says I’ve wasted his money, and I’m destructive.”

“No, no,” Lyn told him. “Your dad doesn’t understand the word destructive. You are not destructive; you are deconstructive.”

It was all a misunderstanding.

Together they wrote his dad a letter to explain what the little boy had just told her. His chin went up and his eyes lit up, Lyn said. “What is that light? It’s not reflecting [from] outside of themselves. It’s reflecting the light within them, which is their true self,” she said.

That spark within us may have different names, she said: soul or spirit, the unfed flame, the light within. But looking at any scripture, “any great work of literature, and there will be references to that heart. It’s not the heart, the beating heart.” It’s sometimes called the spiritual heart. “I’ve seen beautiful scriptures describing it beautifully. It’s what makes us all one. Everyone has that spark of light,” she said.