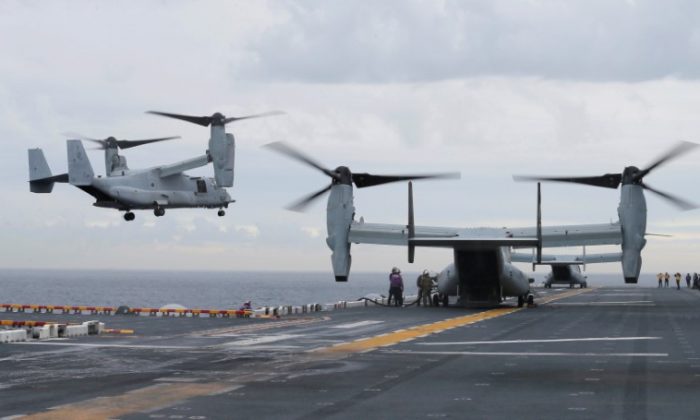 U.S. Marine MV-22B Osprey aircraft land on the deck of the USS Bonhomme Richard amphibious assault ship during events marking the start of Talisman Saber 2017, a biennial joint military exercise between the United States and Australia, off the coast of Sydney, Australia on June 29, 2017. (REUTERS/Jason Reed)
International

3 US Marines Go Missing Off Australia After Aircraft Crash

SYDNEY/SINGAPORE—The Marine Corps said on Saturday a search and rescue operation was underway for three service members involved in an aviation “mishap” off the east coast of Australia, with 23 others rescued.

The incident involved an MV-22 Osprey tilt-rotor aircraft, the III Marine Expeditionary Force based in Okinawa, Japan said in a statement.

“The aircraft involved in the mishap had launched from the USS Bonhomme Richard (LHD 6) and was conducting regularly scheduled operations when the aircraft entered the water,” the statement said.

“The ship’s small boats and aircraft immediately responded in the search and rescue efforts.”

Australia’s defense minister said in a statement that no Australian Defence Force personnel were on board. The incident occurred off the coast of Shoalwater Bay, in the state of Queensland, the statement said.

Michael Augustus, a spokesman for Queensland Ambulance, said one person had been taken to Rockhampton hospital, but he gave no further details of the circumstances and no details of the person’s condition.

The defense minister, Marise Payne, said she had briefed the U.S. defense secretary and the Australian prime minister.

The U.S. Marine Corps said the incident was under investigation but gave no additional information.

More than 33,000 U.S. and Australian military personnel, including the Bonhomme Richard Expeditionary Strike Group, participated in the recent Talisman Saber joint military exercise in Australia which ended on July 25, according to a statement from the U.S. Army Public Affairs Office.

Australia is a military ally of the United States.