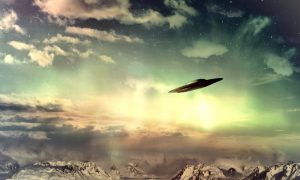 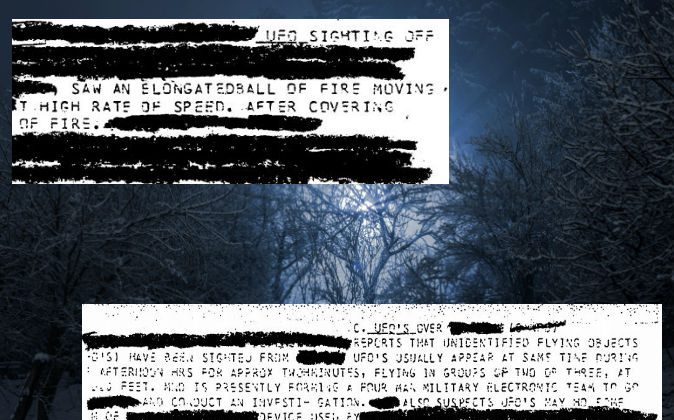 Excerpts from a declassified National Security Agency document on UFOs. (Screenshot/NSA.gov; Background concept image of a UFO via Thinkstock)
Beyond Science

The U.S. National Security Agency (NSA) recorded several sightings of unidentified flying objects [UFOs] in a top secret report. In 1980, a civil action suit was brought against the NSA by a group called Citizens Against Unidentified Flying Objects Secrecy.

Since that time, the NSA has declassified many reports on UFOs.

Here’s a look at four of the incidents in one of the declassified documents. Information has been redacted, making it difficult at times to piece together the findings. The reports often conclude the objects could be propaganda balloons or satellites.

Multiple UFOs were detected on radar usually between the time of 7 p.m. and 9:30 p.m. traveling against the wind, according to the NSA report. The largest number observed at one time was eight, and they were estimated to be flying at a height of 50,000 feet. The objects were described as yellow or green and as drifting over the area (the location is not given).

Military electronics experts were sent to investigate, along with a civilian meteorologist and a civilian scientist.

It seems one person thought the UFOs could be sophisticated devices of some sort, though it is unclear who held this opinion or what specific kind of devices they could be. The report states: “Possibility that UFO’s some kind of sophisticated [redacted] device appears remote though this is what [redacted] suspects.”

The report states that four reliable Americans spotted them and said they may be satellites or space debris. One of the observers had spent years professionally observing satellites. Though the sentence specifically describing this observer’s opinion is partially redacted or illegible, it seems to indicate he thought the object he saw was similar to a satellite: “He indicated this observation, made from [redacted] outside [redacted] was of [illegible] nature, a yellowish object on a steady course.”

As in the previous report, another report states that UFOs described as yellow or green seem to drift over an area (again unspecified). A total of 33 were sighted in the area.

The chances that the UFOs are “some kind of sophisticated [redacted] device appears remote,” the report states. “Unless amplifying [illegible] received, most plausible explanation of UFOs is that they are either [redacted] or [redacted] propaganda balloons.”

It is common for people who report seeing UFOs to describe multiple, smaller UFOs coming out of one large one.

In one of the NSA reports, it seems the original object disappeared, however, becoming three separate objects.

“[Redacted] saw an elongated ball of fire moving … [redacted] … high rate of speed. After covering some distance, it split into three balls of fire,” the heavily redacted report states.

Again propaganda balloons or satellites are posited as explanations.