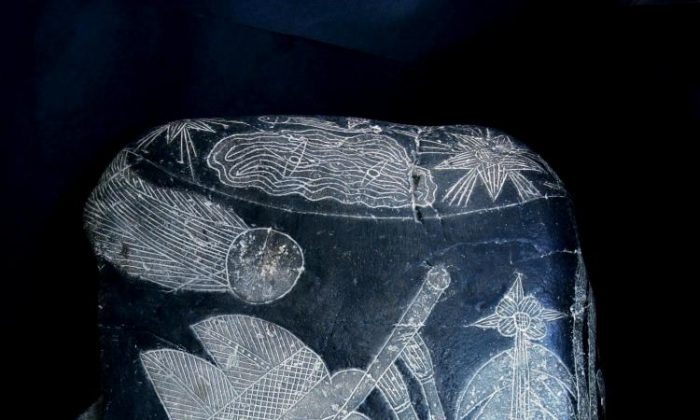 A figure engraved on a stone believed to be as old as 65 million years holds a telescope, an invention believed to be created in 1609 by Galileo. (Courtesy of Eugenia Cabrera/Museo Cabrera)
Beyond Science

Such evidence could turn our scientific certainties upside down. It wouldn’t be the first time—the history of science proves, after all, that science has been grossly wrong on countless occasions.

Paradigm shifts are ushered in amid abundant controversy. The following discoveries have been contested, but some scientists have maintained that they constitute indisputable evidence that tens of thousands, or even many millions of years ago, humans walked the earth with as much knowledge and culture as today’s people.

In 1972, a French factory imported uranium ore from Oklo, in Africa’s Gabon Republic. To its surprise, it found the uranium had already been extracted.

They found the site of origin to be a large-scale highly advanced nuclear reactor that came into being 1.8 billion years ago and was in operation for some 500,000 years.

Scientists gathered to investigate, with many explaining it away as a wondrous, yet natural, phenomenon.

Dr. Glenn T. Seaborg, former head of the United States Atomic Energy Commission and Nobel Prize winner for his work in the synthesis of heavy elements, explained why he believes it wasn’t a natural phenomenon, and thus must be a man-made nuclear reactor.

For uranium to “burn” in a reaction, very precise conditions are needed.

The water must be extremely pure, for one. Much purer than exists naturally anywhere in the world.

The material U-235 is necessary for nuclear fission to occur. It is one of the isotopes found naturally in uranium.

Several specialists in reactor engineering have said they believe the uranium in Oklo could not have been rich enough in U-235 for a reaction to take place naturally.

Furthermore, it seems the reactor was more advanced than anything we could build today. It was several miles in length and the thermal impact to its environment was limited to 40 meters (about 131 feet) on all sides. The radioactive waste is still contained by surrounding geological elements and has not migrated beyond the mine site.

It is thought that Galileo Galilei invented the telescope in 1609. A stone believed to have been engraved as long as 65 million years ago, however, shows a human figure holding a telescope and observing the stars.

While some say the stones are fake, Dr. Dennis Swift, who studied archaeology at the University of New Mexico, documented in his book “Secrets of the Ica Stones and Nazca Lines” evidence that the stones date back to Pre-Columbian times.

Swift says one of the reasons the stones were considered fake in the 1960s is that, at the time, it was believed dinosaurs walked dragging their tails, but the stones depict dinosaurs with their tails up, and thus were thought to be inaccurate.

Later studies showed, however, that dinosaurs likely walked with their tails up, as depicted on the stones.

These paintings were confirmed as genuine in 2002. Investigators, such as Michael Rappenglueck of the University of Munich, insist that these important artifacts are simply ignored by modern science.

Rappenglueck has studied the advanced astronomical knowledge of Palaeolithic people. He writes: “For some years it has been left to broader media coverage (in the form of printed matter, audio-visual material, electronic media and planetarium programs) to raise awareness of proto-astronomy (as well as proto-mathematics and other proto-sciences) during Palaeolithic times.”

Some of the stones from La Marche cave are on display at Paris’s Museum of Man, but the ones that clearly portray prehistoric people with advanced culture and thought are not to be seen.

Cave painting from the cave of Altamira in the Anthropos Pavilion of The Moravian Museum in the Czech Republic. (Wikimedia Commons)

When paintings from more than 30,000 years ago were first discovered in the caves of Europe in the 19th century, they challenged the commonly accepted understanding of prehistory. One of the greatest critics of the discovery, Emile Cartailhac, came around decades later and became a leading force in proving the paintings are genuine and raising awareness of their importance.

He is now considered a founding father of cave art studies.

The first paintings were discovered by Don Marcelino Sanz de Sautuola, a Spanish nobleman, and his daughter, Maria, in 1879 in the Altamira cave. They showed an unexpected sophistication.

The discovery was dismissed, until the early 20th century when Cartailhac published a study of the paintings.