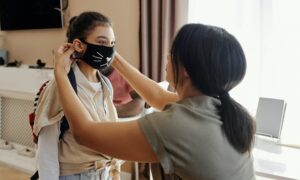 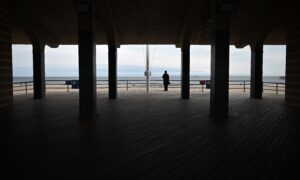 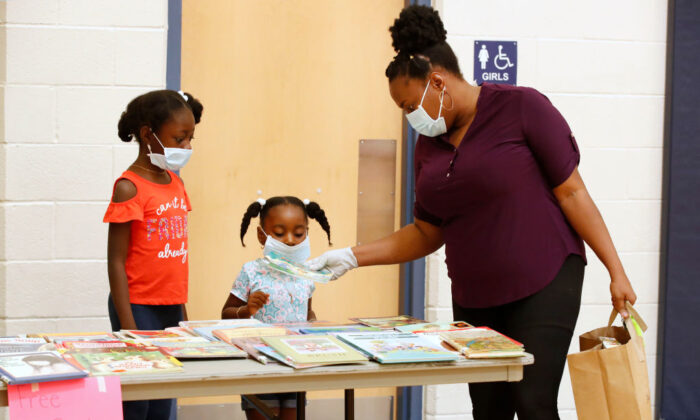 A parent and her children look over the free book table after picking up their personal belongings that have been put in a paper bag in the gym at Freedom Preparatory Academy in Provo, Utah, on May 18, 2020. (George Frey/Getty Images)
CCP Virus

Three in ten parents in the United States have said in an online poll that the CCP virus pandemic is impacting their children’s mental health.

Nearly 29 percent of the parents who participated in a Gallup Panel poll conducted during May said that their child is “already experiencing harm” emotionally and mentally due to social distancing and closures.

Another 14 percent of the parents said that their child can take social distancing for only a few more weeks until their mental health suffers, according to a statement posted on June 16.

The Gallup Panel said while the CCP virus hasn’t infected a large number of children much, it has taken a toll on the well being of many.

The poll results are based on self-administered web surveys with 1,200 parents of children from grades kindergarten through 12 whose schools are closed during the lockdown.

29% of U.S. parents say their child’s emotional or mental health is suffering because of social distancing practices and business or school closures. https://t.co/kxy6GZO9cI

The Gallup survey said of all the participating parents who said their child’s emotional and mental well being is suffering, 33 percent have less than a college degree and 24 percent have a college or a higher degree.

“There may be additional stressors for children whose parents have less educational attainment, as they are disproportionately affected by increased unemployment rates,” noted the Gallup survey in its statement.

Another report by the European Society for Child and Adolescent Psychiatry (ESCAP) had earlier said that the pandemic has caused uncertainty and provoked anxiety, fear of the unknown, and stress.

“Children will look to their parents or caregivers for answers and explanations, parents will be bombarded with information that is hard to digest and perhaps not completely factual, some children will be isolated in an already abusive environment, physicians and medical health workers are strained and delving into the unknown. All of this will take its toll,” noted ESCAP.

The Gallup survey said the school closures impacted children’s social networking and interaction with classmates and teachers and as the reopening happens, schools will have to support the children’s social and emotional needs.

“The challenge will be amplified because schools will be experimenting with new processes intended to stave off the persistent threat that the coronavirus poses to public health,” it said.

The study said there will be a greater need for collaboration between schools, families, community leaders, and health officials to ensure children’s well being.