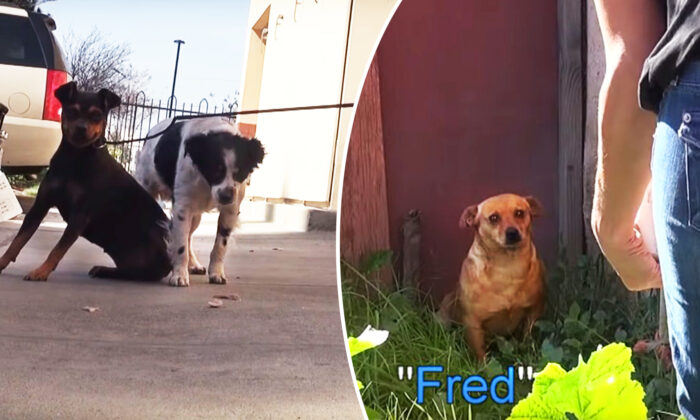 3 Dogs Left Homeless After Owner Dies Get a Second Chance–If Rescuers Can Catch Them!

When the owner of three dogs named Fred, Ricky, and Ethel died, the dogs were rendered homeless. No arrangements had been made for their care in a will or living trust, so the dogs were thrown onto the streets of Los Angeles by the owner’s surviving relatives to fend for themselves.

The three pups, grieving for their late owner, found themselves in the city of Compton nearby their former home. The home’s new owners were kind enough to recognize the dogs’ need and placed leftovers outside the house for the dogs to pick through, but Fred, Ethel, and Ricky no longer had a roof over their heads.

They waited in the yard of the newly occupied home for 18 long months, desperate for their owner to return. Of course, the owner never returned.

When Los Angeles-based rescue organization Hope For Paws heard about the three dogs’ plight, they immediately agreed to visit the neighborhood in an effort to help the homeless pups.

The new homeowner gave Hope for Paws’ rescuers, Eldad and Lisa, permission to access their yard to look around for the homeless pack of three.

When the two volunteers arrived, they found Fred. He was frightened, defensive, and reluctant to leave.

After so long without knowing the loving touch of a human, Fred was unsure of how to respond to the volunteers’ petting. Moving footage later shared by Hope for Paws on YouTube shows the frightened pup cowering by the side of the house, unable to decide whether the humans were there to harm or help him.

Soon, however, Fred softened and seemed to become accustomed to a gentle chin rub.

Ethel and Ricky were also discovered shortly thereafter, sleeping outside a local mini-mall. They, too, put up a fight. Once tethered, both dogs had to be shifted quickly from the street into the rescuers’ vehicle for fear that they would chew through their leashes and bolt into oncoming traffic.

Luckily, they made it safely to the vet for medical attention, sustenance, and the comfort of a couch for the first time in a very long time. All three pups were then placed into foster care courtesy of ARK Animal Rescue in order to make a full recovery from their heartbreaking ordeal, and to get ready for life in their new forever homes.

Eldad of Hope For Paws later took to Facebook to clarify some details about the homeless pups’ situation. “After their owner passed away, his family cleared the house, threw the dogs out to the street, and that was the end of that chapter,” he wrote.

“The current family who moved into the house was very kind to feed them during all this time,” Eldad continued, adding that when he had arrived on the scene with Lisa, a large bowl of pasta with meatballs had been left out for the dogs.

“Compton is a rough neighborhood where people are struggling to survive,” he explained, “and I appreciate any act of kindness towards these dogs who were at least well fed.

“Please remember to include your pets in your will or living trust,” Fred, Ethel, and Ricky’s rescuers implored, “to ensure they have a loving place to go.”

No pet should have to face life on the streets after their owner passes away. Fred, Ethel, and Ricky represent the lucky few who receive the attention, compassion, and care of their community.

There will be no more cowering in the shadow of their former home or picking through scraps for these three brave pups; today, their futures look brighter.