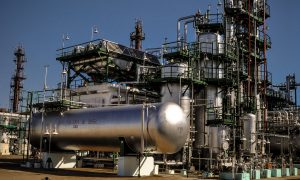 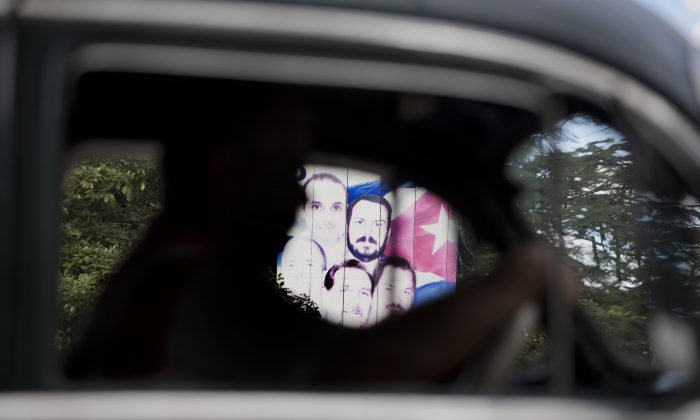 A billboard showing "The Cuban Five" is seen through the other side of an American classic car driving through Havana, Cuba, Wednesday, Dec. 17, 2014. The Cuban Five were part of the "Wasp Network" sent by then-Cuban President Fidel Castro to spy in South Florida. The men, who are hailed as heroes in Cuba, were convicted in 2001 in Miami on charges including conspiracy and failure to register as foreign agents in the U.S. On Wednesday, Dec. 17, 2014, three of the five Cubans were released by the U.S. in exchange for U.S. citizen Alan Gross and an unnamed Cuban man who was imprisoned for nearly 20 years for spying for the United States. Two of the Cuban Five had previously been released after finishing their sentences. (AP Photo/Desmond Boylan)
Americas

3 Cuban Spies Released in US, Members of the ‘Cuban Five’

HAVANA—Members of the Cuban parliament gave a standing ovation Saturday to three men convicted of spying in the United States who were released as part of a historic agreement to restore relations between the two long-hostile countries.

The three men appeared before the National Assembly along with family members. Seated behind them in the audience was Elian Gonzalez, the young Cuban rafter who in 2000 was at the center of a bitter custody battle between relatives in Miami and his father in Cuba.

Dictator Raul Castro thanked all those who helped secure the release of the convicted spies, members of the so-called “Cuban Five” who operated in South Florida in the 1990s. While praising Obama’s moves, the Cuban dictator made it clear that the agreement between the two countries only goes so far, reminding the audience of his call for the U.S. Congress to end the trade embargo.

Castro also confirmed he would attend the Summit of Americas in Panama in April, where he is expected to have further discussions with Obama.The dictator closed his speech with “Viva Fidel,” in reference to his older brother who has not been seen or heard from since the historic development was announced on Wednesday.

The dictator’s address to the National Assembly was his first since he told his countrymen of plans for Cuba and the U.S. to open embassies and exchange ambassadors for the first time in more than 50 years.

The agreement included the exchange of the three prisoners, convicted in 2001, for a Cuban who had been imprisoned on the island for nearly 20 years for spying on behalf of the CIA. Two members of the Cuban Five, Fernando Gonzalez and Rene Gonzalez, had been released by the U.S. previously.

As part of the exchange, Cuba also released 53 other prisoners as well as American Alan Gross, a U.S. government contract worker who had been held in Cuba for five years for illegally importing restricted communications equipment.

To many exiles and their allies, Raul Castro is a brutal dictator who locks up dissenters in gulag-like jails, snuffs out political discourse and condemns his people to socialist poverty. Cuba’s supporters see the government as heroic, its sins justified.

With the new U.S.-Cuba deal, human rights activists remain concerned about Cuba’s record and warn that apparent improvements may not be signs of actual change. For example, while the government has moved away from sentencing dissidents to long jail terms, short-term detentions have spiked under Raul Castro, from 2,074 in 2010 to 8,410 through the first 11 months of this year.

From the Associated Press. AP reporters Peter Orsi and Paul Haven contributed to this report.