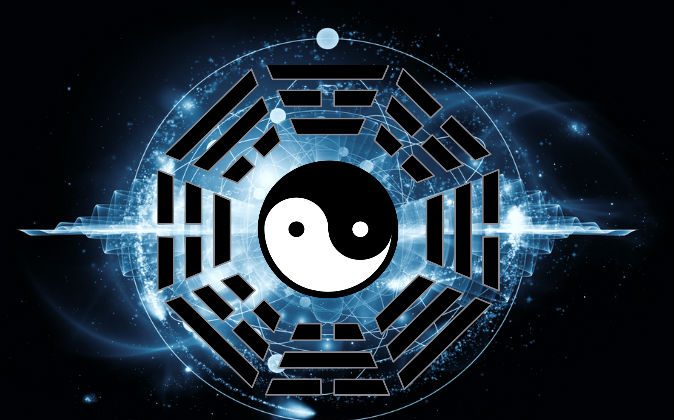 Niels Bohr, a pioneer of quantum mechanics, chose the Taoist yin-yang symbol for his coat of arms.

He saw that the polarized states of particles, for example, complement each other the way the two extremes of yin and yang create a balance in the Taoist understanding of the universe. Bohr spoke of the unity of opposites and contradictions in nature.

Many concepts in ancient Chinese science correspond to ideas physicists have only formed in the past century or so. Here’s a simple look at a few such concepts.

Eight symbols made up of different combinations of lines, known as the eight trigrams, surround the yin-yang symbol. (Benoît Stella via Wikimedia Commons)

The eight trigrams are presented in the classic Chinese text “I Ching” (“Book of Changes”), an important and fundamental work in Chinese history. The trigrams each represent essential principles of reality and they are arranged in an octagonal pattern based on the relationships and interactions between them.

In his 1975 book, “The Tao of Physics,” physicist Fritjof Capra wrote that this octagonal pattern is similar in certain ways to the meson octet “in which particles and antiparticles occupy opposite places.” The important part for Capra is that the concept of structure and change is similar.

“Both modern physics and ancient Chinese thought consider change and transformation as the primary aspect of nature, and see the structures and symmetries generated by the changes as secondary,” he wrote.

2. The Book of Changes and the Elusive Theory of Everything

Modern physics rests on the two pillars of general relativity and quantum mechanics. The problem is the two are contradictory.

In 1999, Brian Greene wrote in his Pulitzer Prize-nominated book “The Elegant Universe”: “As they are both currently formulated, general relativity and quantum mechanics cannot both be right. The two theories underlying the tremendous progress of physics during the last hundred years—progress that has explained the expansion of the heavens and the fundamental structure of matter—are mutually incompatible.”

String theory attempts to do this. In simplified terms, string theory conceives of the universe as strings rather than separate points. An electron, for example, would not be a point, but rather a part of a string. If the string oscillates one way, it appears to be an electron, if it oscillates another way, it could appear to be a photon or a quark. These strings may originate in another dimension without gravity.

When Capra was writing in the 1970s,  the S-matrix theory, a precursor to string theory, was on the rise (though still on the fringe).

Capra wrote: “The ‘I Ching’ is perhaps the closest analogy to S-matrix theory in Eastern thought. In both systems, the emphasis is on processes rather than objects. In S-matrix theory, these processes are the particle reactions that give rise to all the phenomena in the world of hadrons [a type of subatomic particle].

“In the ‘I Ching,’ the basic processes are called ‘the changes’ and are seen as essential for an understanding of all natural phenomena.”

Some say this comment is related to the various levels of particles: molecules, atoms, electrons, and so on.

The ancient Greeks also theorized about atoms. Electrons were only discovered in 1897 and the other subatomic particles followed.

Some of the greatest modern physicists have nonetheless been inspired by, and have identified with, ancient Chinese science.

Quantum physics has shown that the observer can change the outcome of an experiment simply through the act of observing. “Mystics also say the observer and observed fuse, they can no longer be separated,” said Capra in a recorded interview published on YouTube. It is possible that the intent of the researchers could even influence the outcome of the experiments. Some studies have begun to show the effects of human mind-intent on physical reality, though the subject has not yet been embraced by mainstream science. Dean Radin of the Institute of Noetic Sciences and William A. Tiller of Stanford University are two scientists, for example, who are exploring this topic.

“Our Western science ever since the 17th century has been obsessed with the notion of control, of man dominating nature,” Capra said. “This obsession has led to disaster.”

Image of Capra by Zenobia Barlow via Wikimedia Commons.