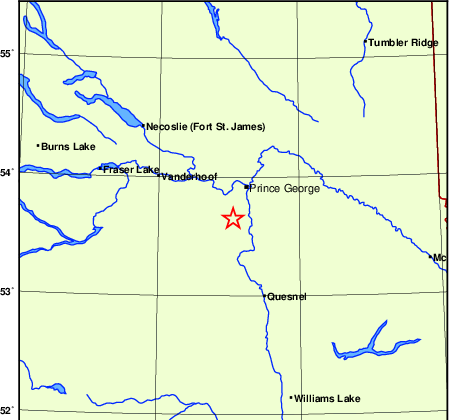 Most of the people who reported feeling the quake’s effects described its intensity as “weak,” but 28 people described it as being a degree higher than that, according to the Community Internet Intensity report.

“There are no reports of major damage or injuries and none are expected.” Emergency Info B.C. stated, declaring the quake occurred just after 3 p.m. on Sept. 21, with a 3.4 magnitude, and at a depth of 5 kilometres.

Earthquakes with a magnitude less than 3.5 are recorded on local seismographs but generally not felt. In contrast, quakes at 3.5 to 5.4 magnitude are often felt but rarely cause damage, according to Earthquakes Canada.

“It is very unlikely that an earthquake of magnitude less than five could cause any damage,” Earthquakes Canada states on their website.

“Yes! Very strong abrupt shake, felt like someone drove a truck into the house, or shook it by its shoulders. I’m in Tabor Lake,” one person commented on Twitter. Tabor Lake is about a 20-minute drive from northwest of Prince George.

According to Earthquakes Canada, the quake occurred 32 kilometres southwest of Prince George.

Seismologist Taimi Mulder with Natural Resources Canada said, “earthquakes are not common in that area, however, they are not unknown. It’s not unreasonable to have an earthquake of this magnitude but they are few and far between—probably once a decade.”

“The building code designs are such now that buildings won’t collapse and this is just around the area where you might start to see the damage. In general, there is not too much worry for residents of Prince George,” she said.

Dr. Fei Tong, an Assistant Professor of Seismic Engineering at UNBC, echoed a similar remark: “Engineers carefully design these structures such that this damage will not cause the overall collapse of the building,” telling the local media Prince George Now that the city is at very low risk for damage from earthquakes.