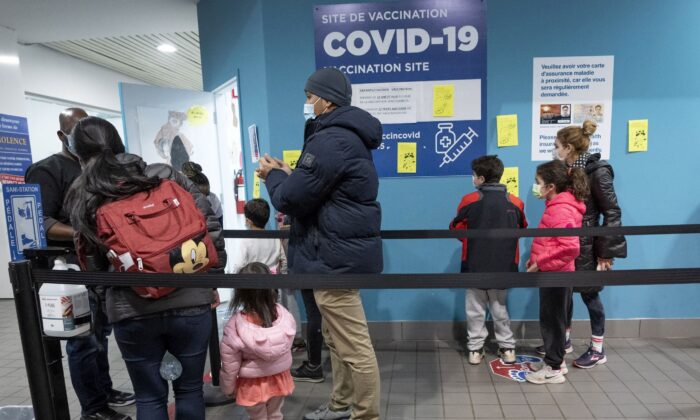 People line up to get their children vaccinated at a clinic in Montreal on Nov. 25, 2021. (Ryan Remiorz/The Canadian Press)
Canada

A second professor from Laval University in Quebec City has been suspended for questioning the need to vaccinate children against COVID-19.

Nicolas Derome, a professor of molecular biology, was suspended for the same reason and under similar circumstances as his colleague Patrick Provost, a professor of microbiology, infectious diseases, and immunology.

Derome and Provost both participated in activities organized by Réinfo COVID, which describes itself as a collective of nurses, physicians, scientists, and citizens seeking to generate debate about how the pandemic has been handled by the government.

Derome gave an online presentation organized by the collective in late November 2021, in which he said children were not at high risk for complications from COVID-19.

He said there had been “zero” serious cases among the 0 to 17 age bracket, with or without comorbidity, with his presentation slide indicating the data came from Quebec’s public health institute (INSPQ) and expert assessments.

A review of the INSPQ data for the first four waves, covering Feb. 23, 2020, to Dec. 4, 2021, reveals there were 73 ICU admissions for individuals between age 0 and 19. The data does not indicate if the admissions were “because of COVID” or “with COVID.”

Derome also said children between 1 and 14 years old were 15 times more likely to die from a road accident than from COVID, and noted there had been no deaths for the 5 to 19 years olds.

“This information is very important to have in order to make a free and informed choice regarding this vaccination campaign for kids 5 to 11,” he said at the start of his presentation.

A current review of data for the first four waves shows one death occurred for the 10–19 age group during the third wave. A separate INSPQ chart reviewed on deaths and presence of comorbidities shows no deaths reported for the 19 and under category with the mention that percentages are not reported when the total number is less than 5.

Derome said, quoting published literature, that children have a better innate response to defend against COVID, which explains why they suffer less serious outcomes.

The professor also quoted from the U.N. children agency UNICEF, which said at the time that the World Health Organization (WHO) did not recommend COVID vaccines for children, due to lack of trials and little to no safety data for that age group.

Since then, the WHO has said that the Pfizer vaccine can be safely administered to children from 5 years of age and that both Pfizer and Moderna are licensed for use in children above 12.

The professor also raised the issue of the waning efficacy of vaccines—not only against infection, but hospitalizations—by quoting White House COVID adviser Anthony Fauci.

Derome gave his presentation when Quebec had just started its vaccination campaign for 5- to 11-year-olds.

Derome was contacted by The Epoch Times but was not available to comment.

Laval University said when contacted that it would not comment on the “personal situation of its employees.”

At the time Derome’s video was published, Laval spokesperson Andrée-Anne Stewart told Radio-Canada that his remarks “in no way reflect the stance of Laval University and its faculty of science and engineering regarding the health crisis.”

“Like all members of the teaching staff, professor Derome is held to all the rigour and scientific integrity required by this function,” Stewart said.

On Dec. 7, 2021, Derome’s colleague, Patrick Provost, said in a scientific panel organized by Réinfo COVID that, based on provincial data, there is more risk of hospitalization for children from the vaccines than from COVID-19 itself, in addition to not having a portrait of mid- to long-term side effects.

Provost was suspended for eight weeks without pay in mid-June for his comments. It’s likely that Derome received a similar penalty.

Réinfo COVID posted a letter on its website presumably from Provost asking, on behalf of Laval University, that the video of the panel he participated in be taken down, or else he could face further sanctions, including being fired.

The collective refused, citing the need for the public to be aware of the “utility, efficacy, risks, and ethics of vaccinating children.”

Réinfo said it would try to help the professors, noting: “If universities gag their professors, as do different professional orders, we’re sliding into dictatorship.”

The suspensions of Derome and Provost have added fuel to the debate about academic freedom in Quebec, which just last month adopted a law to protect it.

“Those situations at Laval University confirm that it was necessary to legislate on this issue and the law stipulates that every university must, within a year, write a policy and put in place a committee to monitor the implementation of the policy and review the complaints related to academic freedom in universities,” Higher Education Minister Danielle McCann said in a statement to The Epoch Times.

“The law also emphasizes that academic freedom must be practiced in conformity with norms of scientific rigour.”

The professors have the support of their union, which has filed a grievance, and of the larger union federation it’s affiliated to.

“Independently of what we can think of comments or statements made by a colleague, heads of the university have no legitimacy to intervene in the content of comments made by those colleagues,” says an email sent by the Laval teacher’s union (SPUL) to its members.

“The leadership of Laval University made a wrong call and hurts the principles guaranteeing the functioning of the University and academic freedom,” SPUL president Louis-Philippe Lampron said in a tweet.

The Epoch Times reached out to SPUL but didn’t hear back by publication time.

A provincial university professor’s labour union federation to which the SPUL is attached, the FQPPU, said the suspension of the two professors was even more “serious and surprising” since it occurred after the province passed the law on academic freedom.

“The conformity to the consensus of a scientific community is in itself not a sufficiently precise norm to justify a disciplinary sanction against a professor who exercises his academic freedom,” the FQPPU said in a statement.

It said it’s the duty of colleagues and other academics to refute or point out weaknesses in remarks or works presented.

“In an institution that respects academic freedom, it’s by refutation that professors and others participating in teaching and research must push back against comments which drift away from the knowledge validated by proven methods.”