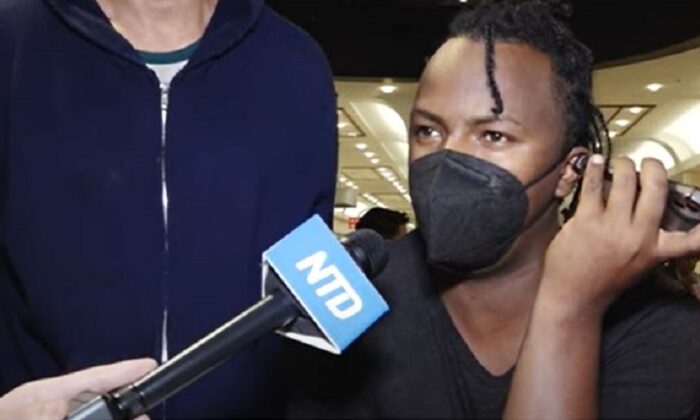 Luis Alberto, one of the illegal immigrants who took a bus from Texas to Washington, speaks to a reporter in Union Station on April 13, 2022. (NTD Television)
Politics

A second bus carrying illegal immigrants from Texas arrived in Washington on April 14.

The bus arrived at around 4:30 a.m., according to footage captured by Fox News, about 28 hours after the first one. The second bus stopped on First Street, one block from Union Station, to let the passengers off.

U.S. Capitol Police officers asked questions of the immigrants, who were allowed to walk to Union Station several minutes later.

It remains unclear which authorities have been processing them after they arrive in Washington, although the nonprofit Catholic Charities has been providing them with food and bus tickets after they’ve been processed.

A Department of Homeland Security (DHS) spokesman told The Epoch Times in an email that illegal immigrants who aren’t subject to Title 42, a pandemic-era authority that enables quick expulsion of some aliens, are placed into immigrant enforcement proceedings. Some of the immigrants may be designated for quick removal, while others may be released with a notice to appear in court at a future date. Those who are given a notice can travel freely within the United States.

“Through its Southwest Border Coordination Center, DHS is executing carefully designed plans to manage the processing and transport of noncitizens arriving at the border. Any individual state’s interest in assisting in our plans’ execution should be carefully coordinated with us,” the spokesman said.

The immigrants must choose to take the transportation offered by Texas officials.

Luis Alberto of Venezuela, one of the immigrants, told NTD that he was robbed by cartels and Mexican police officers before crossing into the United States.

“When we got to Texas, we had nothing because they had taken everything. We heard there was help and a bus to Washington and there would be someone to facilitate travel, because in Texas there is no help,” he said.

White House press secretary Jen Psaki told reporters during a briefing hours after the first bus arrived that “it’s nice the state of Texas is helping them get to their final destination as they await the outcome of their immigration proceedings.”

There has been no indication that any White House officials have met with the immigrants, many of whom planned to travel from Washington to other parts of the United States.

Texas Gov. Greg Abbott, a Republican, says his state is transporting the illegal aliens because of the Biden administration’s lax immigration enforcement policies.

“There’s one thing that is perfectly clear, and that is the Biden administration and a lot of leaders in Congress have no idea about the chaos they have caused by their open border policies,” Abbott told reporters in Laredo, Texas.

“And they refuse to come down and see firsthand and talk to the people who are really most adversely affected. If they’re not going to come to the border, I’m going to take the border to them and Washington, D.C.”

Additional illegal immigrants will be bused or flown to Washington so that the White House and Congress will “have to respond and deal with the same challenges that we’re dealing with,” he said.