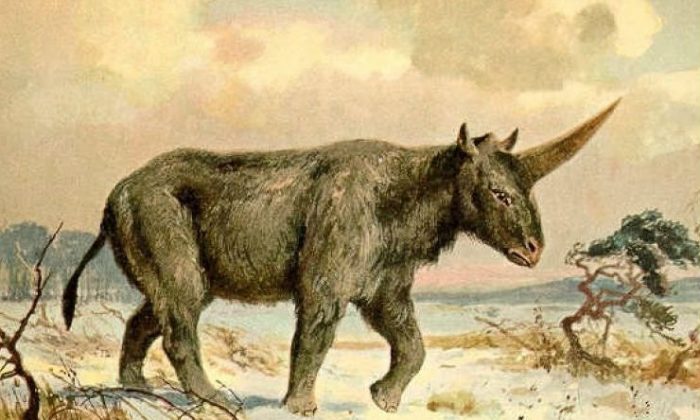 Painting of the Elasmotherium sibiricum or "Siberian unicorn" by Heinrich Harder. (Public Domain)
Beyond Science

Elasmotherium sibiricum, sometimes referred to as the Siberian unicorn, had a horn likely multiple feet long. Only partial remains have been found.

It looked more like a rhinoceros than a horse, weighing about 9,000 pounds. It was thought to have been extinct for more than 350,000 years. But dating of a fossil found in Kazakhstan has recently proven a “unicorn” was still alive 29,000 years ago. The research results were published in the American Journal of Applied Sciences by scientists at Tomsk State University in Russia.

The new timeline places the creature alongside modern man. Could it have been the inspiration for unicorn legends?

The Larger Question of Dating Accuracy

The study suggests: “New data are also pushing for mass radiocarbon studies of mammalian remains that were previously considered … extinct more than 50,000 to 100,000 years ago.”

If it’s not just the Siberian unicorn that lived much more recently than previously thought, it could seriously affect dating based on fossil remains in layers of earth.

The study states: “These data significantly complicate the solution of stratigraphic and geochronological issues based on the remains of fossil mammals in the … sediments.”

Lead author Andrei Shpansky told Forbes: “Most likely, the south of Western Siberia was a refugium, where this rhino persevered the longest in comparison with the rest of its range. There is another possibility that it could migrate and dwell for a while in the more southern areas.”

Was the Mythical Thunderbird a Real Creature?

According to an 1878 account by Sir Norman Lockyer in Nature: “The discoveries of remains of the elasmotherium show that it once wandered over the greater portion of Europe, from the Ural to the Rhine, and as far south as Sicily.”