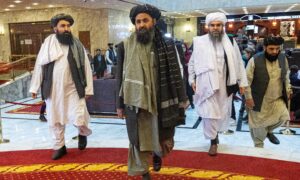 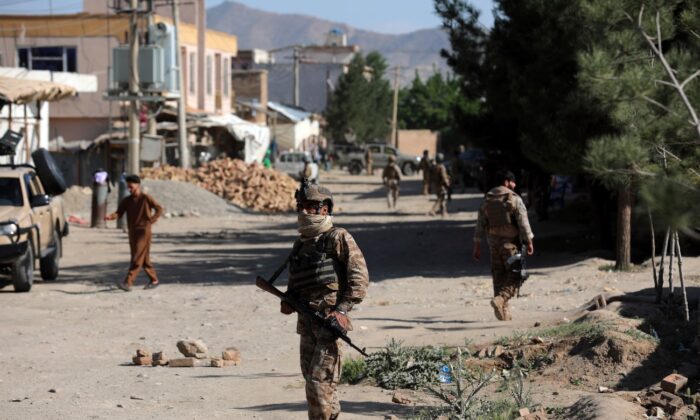 Afghan security personnel arrive at the site of a bomb explosion in Shakar Dara district of Kabul, Afghanistan, on May 14, 2021. (Rahmat Gul/AP Photo)
Asia & Pacific

KABUL—Intense fighting in the northern Afghan province of Kunduz killed at least 28 civilians and injured 290 this week, according to hospital officials, as conflict surges in the war-torn nation while foreign forces withdraw.

Ehsanullah Fazli, head of Kunduz’s provincial hospital, said 28 bodies and 290 wounded civilians had been delivered to two local hospitals in the past three days, with the vast majority of the casualties being children, women, and elderly people.

“The war is still going on in the city of Kunduz and the death toll will rise,” he said.

Fighting has worsened around Afghanistan but especially in the north where Taliban terrorists have conducted a wave of offensives in recent days, moving beyond their southern strongholds.

Since the United States announced plans in April to withdraw its troops without conditions by Sept. 11 after nearly 20 years of conflict, violence has escalated throughout the country as the Taliban terrorist group seeks more territory.

Peace talks in Doha have largely stalled, officials say, though there have been meetings in recent days and the Taliban say they are committed to negotiations.

Afghan President Ashraf Ghani arrived in Washington on Thursday with his former rival and top Afghan peace official Abdullah Abdullah where they were to meet with U.S. President Joe Biden to discuss the U.S. troop withdrawal.

The United Nations envoy for Afghanistan said this week the Taliban had taken more than 50 of 370 districts and was positioned to take control of provincial capitals as the country looked increasingly unstable and analysts warned of the growing risk of civil war as more groups took up arms.

On Wednesday, hundreds of armed men gathered on the outskirts of the capital Kabul and vowed to fight against the Taliban, according to Reuters witnesses.

On Thursday, 130 Taliban fighters surrendered with the help of tribal elders in the western province of Herat.

“They realised that the Taliban’s war with the Afghan government was illegitimate,” Herat Governor Abdul Sabur Qani said at a ceremony to mark the event.

Taliban spokesman Zabihullah Mujahid said the 130 men were not from their group, calling the event “propaganda.”