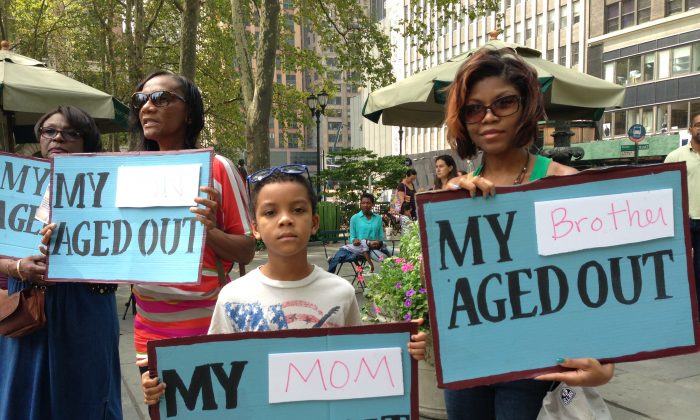 Immigrant Children ‘Aged Out,’ Strive to Get Legal Status

NEW YORK—Growing up in Trinidad and Tobago, Mikhel Crichlow dreamt of becoming an architect in the United States.

As New York struggled to find teachers, Crichlow’s mother was invited to work in the United States in 2001. Crichlow knew that was his chance.

The city was bringing in thousands of teachers from abroad, mostly from Eastern Europe at the time. According to Crichlow the Department of Education assigned a lawyer to help teachers from the Caribbean with their immigration issues. They were also promised a path to citizenship.

But the path to a green card proved too long for many of the teachers. Their children, like Crichlow who turned 21 after arriving in the country, would lose legal status after reaching the legal age of adulthood. There are now about 200 people who became undocumented because they turned 21 before their parents received a green card. The call it being “aged out.” And, after years of silence, they are beginning to speak for their cause.

“My life is on hold because I can’t continue my studies,” Crichlow said. “My dreams have really been set back and I’m just waiting on something to happen.”

Crichlow joined others like him at The Immigrant Youth Association (TIYA) that advocates for issues like the federal DREAM act and opposes the city’s controversial stop-and-frisk policing tactic.

On Aug. 30, they gathered near Times Square and walked to Bryant Park to raise awareness for the cause of those who have been “aged out.” They collected signatures for a petition which asks federal lawmakers to include the children who have been “aged out” in the Comprehensive Immigration Reform bill to ensure that they have a path to citizenship.

“It took my mother 12 years to get a green card, so now I’m undocumented, like my sister,” Alden Nesbitt, 23, said. “Unfortunately for us, when you become undocumented, you can’t work, you can’t go to school, and you can’t become a citizen.”

Nesbitt’s sister, Anthea, 29, has a child, Antonio, 8, and said it’s difficult to care for her child without a legal status in the country.

Alden Nesbitt played the lead role in a skit at Bryant Park which told the story of those who have been “aged out.” In one of the scenes, a large papier mâché
Statue of Liberty puppet turned away from him as he turned 21.

The group plans to put on more events in the near future, including one at the West Indian Day Parade on Monday.