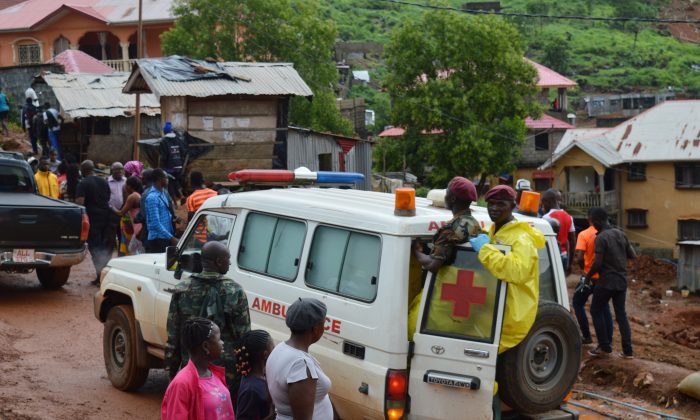 Rescue workers and soldiers ride on an ambulance after a mudslide in the mountain town of Regent, Sierra Leone on Aug. 14, 2017. (REUTERS/Ernest Henry)
Africa

FREETOWN—Rescue workers have recovered 270 bodies so far from a mudslide in the outskirts of Sierra Leone’s capital Freetown, the mayor said on Tuesday, as rescue operations continued and morgues struggled to find space for all the dead.

President Ernest Bai Koroma urged residents of Regent and other flooded areas around Freetown to evacuate immediately so that military personnel and other rescue workers could continue to search for survivors that might be buried underneath debris.

Dozens of houses were covered in mud when a mountainside collapsed in the town of Regent on Monday morning, one of the deadliest natural disasters in Africa in recent years.

“We have a total of 270 corpses which we are now preparing for burial,” Freetown mayor Sam Gibson told reporters outside city hall.

Bodies have continued to arrive at the city’s central morgue. Corpses are lying on the floor and on the ground outside because the morgue is overloaded, a Reuters witness said.

“Our problem here is space. We are trying to separate, quantify, and examine quickly and then we will issue death certificates before the burial,” said Owiz Koroma, head of the morgue.

He did not have an updated death toll but said: “It’s in the hundreds, hundreds!”

Sierra Red Cross Society spokesman Abu Bakarr Tarawallie said by phone he estimated that at least 3,000 people were homeless and in need of shelter, medical assistance and food.

The Red Cross said another 600 were missing.

“We are also fearful of outbreaks of diseases such as cholera and typhoid,” he told the Thomson Reuters Foundation from Freetown. “We can only hope that this does not happen.”


Contaminated water and water-logging often lead to potentially deadly diseases like cholera and diarrhea after floods and mudslides.

“I’ve been looking for my aunt and her two children, but so far no word about them,” said Mohamed Jalloh, crying. He said he feared the worst.

President Koroma said in a television address on Monday evening that rescue centers had been set up around the capital to register and assist victims.

Bulldozers dug through mud and rubble at the foot of Mount Sugar Loaf, where many residents had been asleep when part of the mountainside collapsed. The government said a number of illegal buildings had been erected in the area.