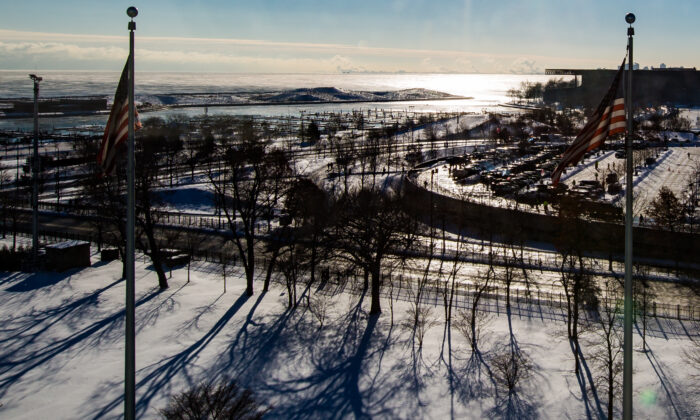 A view from Soldier Field looking toward Lake Michigan in Chicago, Illinois, on Dec. 18, 2016. (Kena Krutsinger/Getty Images)
US News

GREEN BAY, Wis.—Authorities rescued 27 people from a floating chunk of ice that broke away from shore in the bay of Green Bay in eastern Wisconsin, the sheriff’s office said Sunday.

No injuries were reported in the incident that happened Saturday morning north of Green Bay, in the arm that’s part of Lake Michigan, the Brown County Sheriff’s Office reported. Many of the 27 people rescued were ice fishing at the time of the incident.

The chunk of ice floated about three-quarters of a mile during the rescue and was about a mile from the shoreline by the time everyone was brought to solid ground. Authorities said the stranded people were on the separated ice shove for about 90 minutes.

A barge traveling through the bay may have caused the ice chunk to break off the shoreline, the sheriff’s office said. Shane Nelson, who was making his first ice fishing excursion, said the noise sounded like somebody had fired a gun.

“We thought it was interesting, got out of our shanty, took a look and people were yelling on the ice, ‘We’re separating,’” Nelson told WLUK-TV.

Airboats from the Brown County Sheriff’s Office and the U.S. Coast Guard were able to rescue eight passengers at a time.