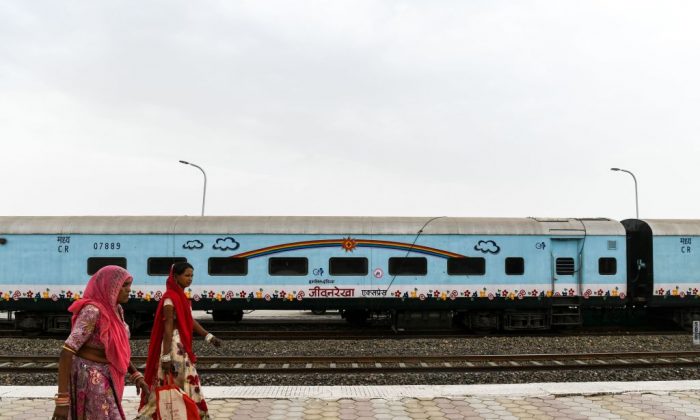 In this photograph taken on April 13, 2018, Indian women walk past the Lifeline Express at a railway station in Jalore in India's western state of Rajasthan. (CHANDAN KHANNA/AFP/Getty Images)
India

A group of 26 underage girls was rescued from human traffickers in India after a concerned train passenger alerted authorities via Twitter.

The passenger, identified as Adarsh Shrivastava, was traveling on a train in the northern Indian state of Uttar Pradesh on July 5. While in the cabin he witnessed some girls in emotional distress and raised the alarm by tagging relevant officials to investigate, including rail authorities, the minister for railways, and even the prime minister.

“I am traveling in Avadh express. … In my coach [there] are 25 girls all are juvenile some of them are crying and all feeling insecure,” Shrivastava wrote on Twitter.

I am traveling in Avadh express(19040). in s5. in my coach their are 25 girls all are juvenile some of them are crying and all feeling unsecure.@RailMinIndia @PiyushGoyal @PMOIndia @PiyushGoyalOffc @narendramodi @manojsinhabjp @yogi

In a subsequent tweet, he said that the girls could be “subject to human trafficking” and gave his current position at Hari Nagar, as well as the following stations in Bagaha and Gorakhpur.

“Kindly help them out. Please help,” Shrivastava pleaded to authorities.

subject to human trafficking )my current station is Hari Nagar my next station is BAGAHA and then Gorakhpur.kindly help them out. Please help.@RailMinIndia @PiyushGoyal @PiyushGoyalOffc @PMOIndia @narendramodi @rajnathsingh

Thirty minutes later, the Ministry of Railways replied to Shrivastava’s tweet and tagged railway police forces. A few stops later, plain-clothes officers boarded the train, according to the Hindustan Times.

Kindly look into this matter @rpfner

According to the paper, the girls are believed to be aged between 10 and 14.

“[Twenty-six] girls were found with two men, aged 22 and 55 years. All of them are from West Champaran in Bihar,” a statement from the Railway Police Force (RPF) said. “The girls were being taken from Narkatikyaganj to Idgah. When questioned the girls were unable to answer anything convincingly, so they have been handed over to the child welfare committee.”

In 2016, 9,104 children were victims of trafficking in India, a 27 percent increase from the previous year, according to the Ministry of Women and Child Development.

“Their parents have been informed and the men have been taken into custody,” RPF said.

Shrivastava is now being praised as a hero online. One Twitter user even requested Prime Minister Narendra Modi to honor him with an award. The message got over 3,400 retweets.