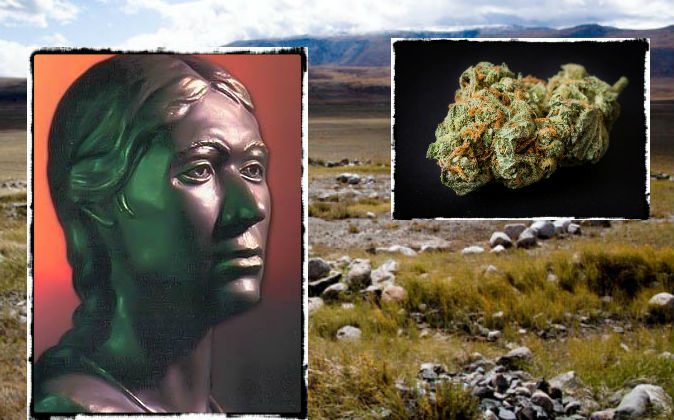 From The Siberian Times: Preserved by ice, the ancient woman, who died at the age of 25 and is covered in tattoos, used cannabis to cope with her ravaging illness.

Studies of the mummified Ukok “princess”—named after the permafrost plateau in the Altai Mountains where her remains were found—have already brought extraordinary advances in our understanding of the rich and ingenious Pazyryk culture.

The tattoos on her skin are works of great skill and artistry, while her fashion and beauty secrets—from items found in her burial chamber, which even included a cosmetics bag—allow her impressive looks to be recreated more than two millennia after her death.

Now, Siberian scientists have discerned more about the likely circumstances of her demise, but also of her life, her use of cannabis, and why she was regarded as a woman of singular importance to her mountain people.

Her use of drugs to cope with the symptoms of her illnesses evidently gave her an altered state of mind, leading her kinsmen to the belief that she could communicate with the spirits, the experts believe.

The MRI, conducted in Novosibirsk by eminent academics Andrey Letyagin and Andrey Savelov, showed  that the “princess” suffered from osteomyelitis, an infection of the bone or bone marrow, from childhood or adolescence.

Close to the end of her life, she was afflicted, too, by injuries consistent with a fall from a horse: but the experts also discovered something far more significant.

“When she was a little over 20 years old, she became ill with another serious disease—breast cancer. It painfully destroyed her [over perhaps five years],” said a summary of the medical findings in the journal Science First Hand, written by archaeologist Professor Natalia Polosmak, who first found these remarkable human remains in 1993.

“During the imaging of mammary glands, we paid attention to their asymmetric structure and the varying asymmetry of the MR signal,” stated Dr. Letyagin in his analysis. “We are dealing with a primary tumor in the right breast and  right axial lymph nodes with metastases.”

“The three first thoracic vertebrae showed a statistically significant decrease in MR signal and distortion of the contours, which may indicate the metastatic cancer process.”

He concluded: “I am quite sure of the diagnosis—she had cancer. She was extremely emaciated. Given her rather high rank in society and the information scientists obtained studying mummies of elite Pazyryks, I do not have any other explanation of her state. Only cancer could have such an impact.

“Was it the direct cause of the death? Hard to say. We see the traces of traumas she got not so long before her death, serious traumas—dislocations of joints, fractures of the skull. These injuries look like she got them falling from a height.”

But, he stressed: “Only cancer could have such an impact. It is clearly seen in the tumor in her right breast, visible is the metastatic lesion of the lymph node and spine … She had cancer and it was killing her.”

While breast cancer has been known to mankind since the times of the Ancient Egyptians, a thousand years before it was recorded by Hippocrates, father of modern medicine, this is a unique case of the detection of the disease using the latest technologies in a woman mummified by ice.

Dr. Letyagin is from the Institute of Physiology and Fundamental Medicine, and Dr. Savelov, an associate in the laboratory of magnetic resonance tomography at the International Tomography Centre, both of the Siberian Branch of the Russian Academy of Medical Science, both in Novosibirsk.

From their work and other data, for example the last food found in the stomachs of horses buried alongside the ancient woman, Dr. Polosmak has formulated an intriguing account of her final months thousands of years ago.

“When she arrived in winter camp on Ukok in October, she had the fourth stage of breast cancer,” Dr. Polosmak wrote. “She had severe pain and the strongest intoxication, which caused the loss of physical strength.”

“In such a condition, she could fall from her horse and suffer serious injuries. She obviously fell on her right side, hit the right temple, right shoulder, and right hip. Her right hand was not hurt, because it was pressed to the body, probably by this time the hand was already inactive. Though she was alive after her fall, because edemas are seen, which developed due to injuries.

“Anthropologists believe that only her migration to the winter camp could make this seriously sick and feeble woman mount a horse. More interesting is that her kinsmen did not leave her to die, nor kill her, but took her to the winter camp.”

In other words, this confirmed her importance. Although she is often called a “princess,” the truth maybe she was, in fact, a female shaman.

“It looks like … after arriving to the Ukok Plataue she never left her bed,” Dr. Polosmak said. “The pathologist believes that her body was stored before the funeral for not more than six months, more likely it was two-to-three months.”

“She was buried in the middle of June, according to the last feed that was found in the stomachs of horses buried alongside her. The scientists think that she died in January or even March, so she was alive after her fall for about three to five months, and all this time she lay in bed.”

Dr. Polosmak said we should pay “special attention [to] … the fact that likely she used some analgesics, with all the ensuing consequences.

“In ancient cultures, from which there is a written testimony, such analgesics … used [include] wine, hashish, opium, henbane, an extract of mandrake, aconite, and Indian hemp. The Pazyryks knew hemp and its features.”

It is known that in her burial chamber was a container of cannabis.

“Probably for this sick woman, sniffing cannabis was a forced necessity,” Dr. Polosmak said. “And she was often in an altered state of mind. We can suggest that through her could speak the ancestral spirits and gods. Her ecstatic visions in all likelihood allowed her to be considered as some chosen being, necessary and crucial for the benefit of society. She can be seen as the darling of spirits and cherished until her last breath.”

Evidently, shamans could often assume their powers after a significant illness: a woman might be physically weakened but able to develop her powers of concentration and meditation. This would explain the efforts her people took to care for her and not leave her to die, or hasten death. It also helps to understand the way her burial was conducted in a style similar to—yet different from—that of royalty.

She was buried not in a line of family tombs, but in a separate and lonely mound, located in a visible and open place. This may show that the Ukok woman did not belong to an exact kin or family, but was related to all Pazyryks who lived on this lofty outpost, some 2,500 meters (1.5 miles) above sea level.

This is an indication of her celibacy and special status. Besides, three horses were buried with her. In a common burial, one would suffice.

Dr. Polosmak has described how the jewellery in the mummy’s grave was gilded wood, so it was not of the highest quality. Yet there was a strange and unique mirror of Chinese origin in a wooden frame. There were also coriander seeds, previously found only in royal mounds. Her mummification was carried out with enormous care in a manner comparable to royals.

Significantly, in the Altai Mountains, her supernatural powers are seen as continuing to this day. Elders here voted in August to reinter the mummy of the ice maiden “to stop her anger which causes floods and earthquakes.”

Known to locals as Oochy-Bala, the claim is that her presence in the burial chamber was “to bar the entrance to the kingdom of the dead.” By removing this mummy, the elders contend that “the entrance remains open.”

They are demanding that she be removed from a specially-built museum in the city of Gorno-Altaisk, capital of the Altai Republic, and that she be reburied high on the Ukok plateau.

“Today, we honor the sacred beliefs of our ancestors like three millennia ago,” said one elder. “We have been burying people according to Scythian traditions. We want respect for our traditions.”