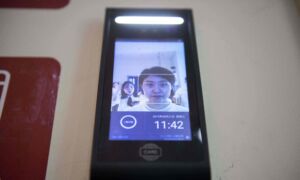 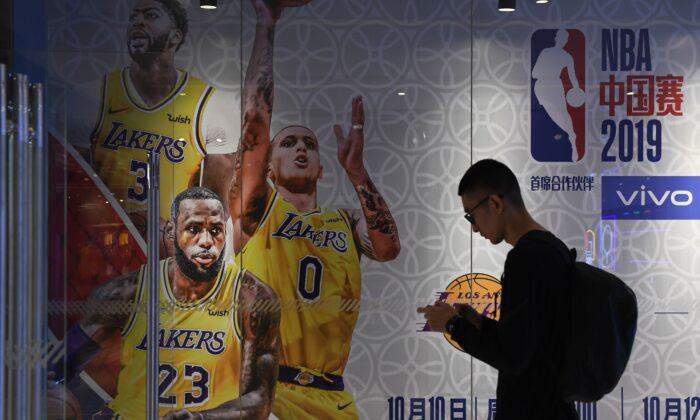 A man walks past an advertisement for scheduled exhibition games in China between the LA Lakers and Brooklyn Nets, at the National Basketball Association (NBA) store in Beijing on Oct. 9, 2019. (Greg Baker/AFP via Getty Images)
US News

A group of 25 senators is urging the U.S. administration to launch a probe into China’s corporate social credit system, in “grave concern” for the threats it could pose to U.S. companies and workers.

In a Dec. 2 letter to trade representative Robert Lighthizer, the senators said that China’s social credit system “raises fundamental questions about whether promised market openings and regulatory reforms on paper will yield a level playing field in practice for American firms doing business in and with China.”

The corporate social credit system, initiated in 2014 and set to be fully functional in 2020, will use an algorithmic system that collects and evaluates corporate data to grade both domestic and international firms on their compliance to roughly 300 state-determined rules.

Companies with scores that fall below a certain threshold will face penalties, including restrictions on business licenses and procurement opportunities, higher tax rates, and even loss of market access.

The first round of evaluation has assigned a score to around 33 million companies, according to a September statement from China’s National Development and Reform Commission, a macroeconomic planning agency under the cabinet-like State Council.

The lawmakers asked the U.S. administration to prioritize research about the impact of such a system, and present the analysis in future reports concerning China and bilateral trade relations.

“Our American values are not for sale—and that’s why we should track China’s efforts to coerce American companies into complying with their flawed system,” said Sen. Cory Gardner (R-Colo.) in a Dec. 2 press release.

Sen. Michael Bennet (D-Colo.) said in a statement, “China’s Corporate Social Credit System is a potentially alarming development given the country’s escalating censorship of the media, internet, and arts in recent years.”

In the letter, the senators made special note of the recent controversy surrounding the National Basketball Association, which saw the organization bowing to Beijing pressure and apologizing for a tweet by the Houston Rockets’ general manager that showed support for the ongoing Hong Kong protests.

The incident was the “latest in a litany of attempts by China to deploy its state and economic power to bend American entities to its will,” the senators wrote.

The senators also expressed concern that with a corporate ranking system in place, the Chinese Communist Party could further exert pressure on American businesses and force them to endorse its political positions.

In 2018, China’s aviation regulator sent letters to 44 international airlines, including American Airlines, Delta, and United Airlines, demanding them to drop references to Taiwan as a country.

The Chinese regime has regarded the self-ruled island as a renegade province to be reunited with the mainland by military force if necessary, despite Taiwan having its own independent government, rule of law, and military.

“American companies need to decide how to respond to Chinese attempts to stifle freedom of speech,” Sen. Chris Coons (D-Del.) said in a statement.

The senators also warned that given the regime’s “disregard for the rule of law, checks and balances, transparency, and a free press,” the corporate social credit system could bring “a broad array of unjustified punishments.”

“As a punishment for individuals representing companies deemed ‘untrustworthy,’ the Chinese government envisions levying travel restrictions, tax discrimination, personal sanctions, and other retributions. In this respect, there are few punishments that can be ruled ‘off the table,’” they wrote.