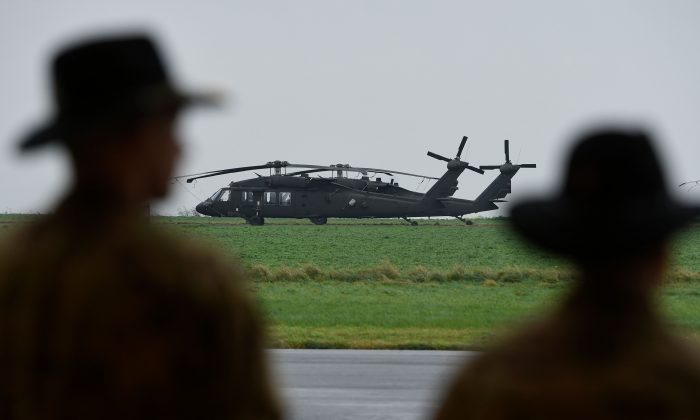 Soldiers from the US Army 1st Cavalry Brigade, 1st Cavalry Division, stand in front of UH-60 Black Hawk helicopters on the tarmac at Shape Airfield at Chievres Air Base in Belgium, on October 24, 2017. (JOHN THYS/AFP/Getty Images)
Crime and Incidents

Nearly two dozen U.S. Army soldiers have been injured after a large tent collapsed on site at Fort Hunter Liggett (FHL) in California.

The army said that a landing UH-60 Blackhawk helicopter was the cause of the incident, which happened at approximately 9:30 p.m. on July 18. The helicopter’s rotor wash “blew over a tent structure” inside the military base.

FHL officials said in an updated statement on the morning of July 19, that all soldiers who were involved in the incident have been released back to their units. The accident occurred during an annual U.S. Army Reserve Combat Support Training Exercise (CSTX) that trains Army Reserve and Army National Guard Soldiers.

First responders at the scene reported there were 22 injuries in total. The army said there were “no fatalities” and that the majority of injuries were minor and were being treated onsite. But some soldiers had to be transported to medical facilities to receive treatment.

In a subsequent statement, the Army confirmed the number of injuries but said they were not able to release any personal information on the condition of any soldier.

“We understand the concern friends and family have for their loved ones currently training at Fort Hunter Liggett. The Garrison, however, is not currently authorized to release any personal information regarding the condition of injured Soldiers,” the army said. “Unit leadership should be contacting families as appropriate.”

The fort is located in the in the mountains of central California and provides critical training areas, ranges, and facilities to support year-round joint, multi-component, and interagency training. According to their website, it is one of the largest Army Reserve installations.