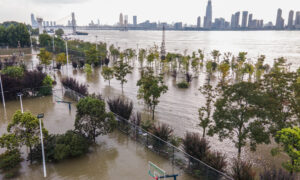 Heavy rainfall continues in parts of China, and on September 22 water levels on the Songhua River in Harbin rose to its warning level. New flood alerts were issued by the Ministry of Water Resources, which warned of coming floods on the Jinsha River in Yunnan, Yuanjiang River, Duliu River in Guizhou, Hongshui River and Youjiang River in Guangxi. It also noted that some small and medium sized rivers in China are expected to have a “super-alarm level of floods.”

As we recently reported, it’s now been exposed that the Chinese Communist Party has built a database that includes profiles of people outside China, including in the United States, Australia, and Canada. The profiles allegedly include politicians, businessmen, academics, and others that Chinese authorities may be interested in targeting. This verifies an exclusive story published in The Epoch Times back in 2016, which exposed a database China had built on Americans. To learn more about this we speak with Casey Fleming, CEO of BlackOps Partners Corp, an intelligence and security strategy firm.