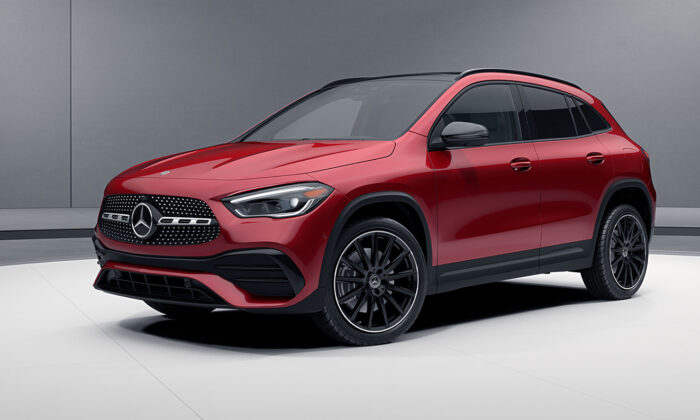 In 2015, when the GLA made its first appearance, it could have been described as a cute little hatchback or a neat little subcompact crossover.

But as I drove the 2021 GLA, I classified it more as an SUV because it is wider, taller and longer than a traditionally styled crossover. Headroom has been increased and a larger back seat has been installed.

The resulting mileage is officially rated at 34 mpg highway and 25 mpg city, for a 28 mpg combined average. Quick math works out to 3.6 gallons to go 100 miles. If you opt for the 4Matic AWD, both city and highway numbers take an 1-mpg hit.

Even though the GLA 250 may be considered an entry level Mercedes-Benz, numerous standard features like keyless ignition, 8-way power seats with 3-position memory, and rearview camera, plus a “Hey, Mercedes” voice command activation all together measure up quite nicely with more expensive competitors.

Outside, GLA 250 rests on 18-inch 5-spoke wheels. Exterior color was Polar White with a spiral-trim. Personally, I would recommend the new leather upholstery with heated front seat package, adding about $2,000.

The 2021 GLA is a city-ready vehicle with a DNA that is birthed in narrow streets, sidewalks, heavy commuter traffic, and an abundance of ferrying bike and pedestrian movement.

The list price, allowing for loads of optional equipment and added packages, is $36,230 for the FWD model. Choosing the 4Matic AWD model adds another $2,000 to the price.

The interior is nice and roomy, but not extensively luxurious. The digital instrument panel was not as easily viewed by driver as I would have liked.

Four competitors I can think of are Buick Encore GX, BMW X2, Lexus UX, and Volvo XC 40. The GLA 250 fell somewhere in the middle of this segment, but very competitive in price.

This vehicle has not been rated by either IIHS or NHTSA as of this writing.

New Mercedes-Benz vehicles are covered by 4 years/50,000 miles New Vehicle Limited Warranty and there are numerous protection products being offered, such as extended limited warranty and prepaid maintenance programs.

Durhl Caussey writes a car column read around the world. He may be reached at this newspaper or durhlcaussey@gmail.com.