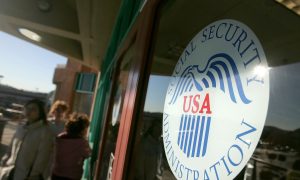 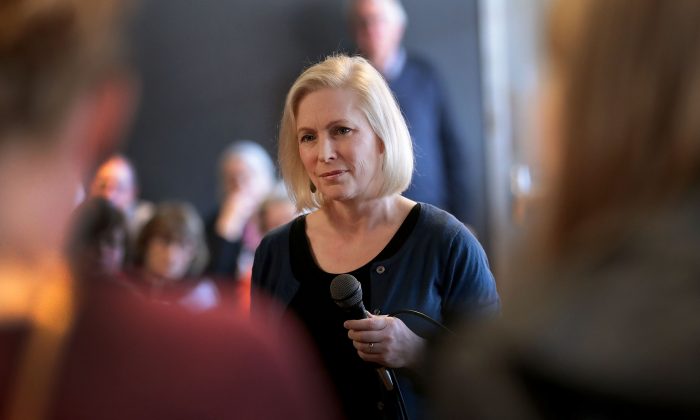 Sen. Kirsten Gillibrand (D-N.Y.), a 2020 hopeful, appeared to call for the expansion of Social Security to illegal immigrants residing in the United States, footage of her speech at a campaign stop in Davenport, Iowa showed.

“First, we need comprehensive immigration reform,” she said. “If you are in this country now you must have the right to pay into Social Security, to pay your taxes, to pay into the local school system and to have a pathway to citizenship. That must happen.”

Last year, Gillibrand became the first sitting senator to call for the termination of the Immigration and Customs Enforcement (ICE) agency. She told CNN that it should be reimagined “under a new agency, with a very different mission” adding that the current department should “start over.”

The senator’s comments on immigration are a sharp contrast from her past. In 2009, she voted to increase funding for ICE and once said she believed English should be the official language of the United States, according to The Washington Examiner.

Only legal immigrants are able to have Social Security benefits after paying into the program for a certain amount of time, according to current U.S. law.

Democrat @SenGillibrand: “I believe you should get rid of [ICE], start over, reimagine it, and build something that actually works #CuomoPrimeTime https://t.co/3SwLWVK0Fa pic.twitter.com/HnpFj19w0z

Earlier this week, Gillibrand made similar comments in support of illegal immigrants during an MSNBC town hall.

“Immigration is not a security issue. It is an economic and a humanitarian and a family issue,” she said on March 18. “There is no such thing as an illegal human.”

During the town hall, she also claimed what President Donald Trump has done on the border is “inhumane and intolerable.”

.@SenGillibrand: “Immigration is not a security issue. It is an economic, and a humanitarian, and a family issue.” #allin2020 #inners pic.twitter.com/i1GX68N9sl

Gillibrand formally launched her presidential campaign on March 17, with an announcement in a video posted on Twitter. The message concludes with an invitation to her kickoff campaign speech in front of the Trump International Tower in New York City on March 24.

Most of the senator’s kickoff video targets Trump. The suggestively edited footage casts a negative light on the president that largely aligns with the attacks on him by establishment media outlets.

In the video, the senator from New York embraces several socialist policy proposals, including universal health care and the Green New Deal. Gillibrand has co-sponsored both the Green New Deal resolution and the “Medicare for All” legislation in Congress, which are fervently promoted by both the Communist Party USA and the Democratic Socialists of America, the largest socialist group in the United States.

“We launched ourselves into space and landed on the moon. If we can do that, we can definitely achieve universal health care,” Gillibrand said in the video. “We can provide paid family leave for all, end gun violence, pass a Green New Deal, get money out of politics, and take back our democracy.”

Gillibrand already has been campaigning in key states that hold early Democratic primary contests. In an average of public opinion polls tallied by Real Clear Politics, she has earned less than 1 percent support, far behind socialist Sen. Bernard Sanders (I-Vt.), who is tied for the lead with Former Vice President Joe Biden at 26 percent.

Gillibrand then won the seat in a special election and was re-elected to six-year terms in 2012 and 2018. She has attributed the ideology shift to representing a liberal state versus a more conservative district.

She joins a crowded field of Democratic contenders. Former Rep. Robert “Beto” O’Rourke (D-Texas) announced his bid days before Gillibrand. All of the Democrats who have formally announced their candidacy and are polling above 1 percent have officially sponsored the socialist Green New Deal resolution, suggesting that the proposal is a litmus test for Democratic candidates.