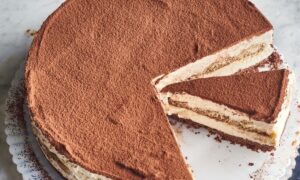 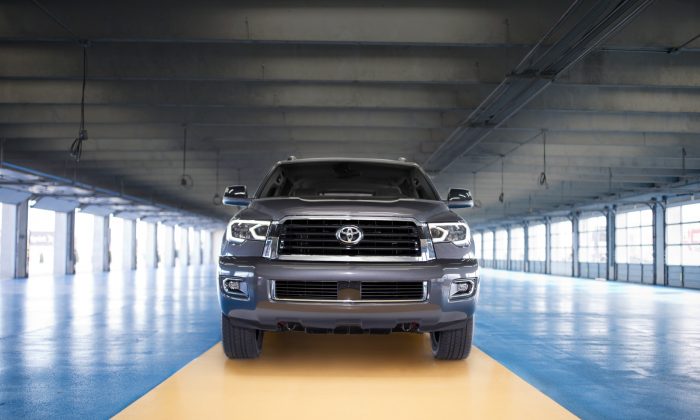 What sets the 2018 Toyota Sequoia TRD Sport apart from the Sequoia SR5, Limited, Platinum, and its brethren, or as a matter of fact most other vehicles in the same category when it comes to handling?

The difference can be found in the TRD sport-tuned suspension, with beefier front and rear sway bars and Bilstein shocks.

TRD, which stands for Toyota Racing Development is the in-house tuning shop that made all of these components work together to give the Sequoia a flatter turning capability and a smoother ride.

The TRD group supports Toyota’s racing teams around the world, and since 1979, the automaker has taken the lessons learned from its race teams and applied them to improve the performance of its regular vehicles. The Sequoia is one example of such trickling down.

The look needs to match the performance, so Toyota threw in LED headlights, a gloss-black grille with chrome surround, and unique 20-inch black alloy wheels to make the Sequoia stand out among other large SUVs.

The 2018 Sequoia is powered by a 5.7-liter i-Force V8 engine with Dual Independent VVTi. The engine puts out 381 horsepower and 402 lb.-ft. of torque, shepherded by a six-speed ECT-i automatic transmission. Power at the wheels is harnessed by a TRD suspension and thicker sway bars, as mentioned earlier. The Sequoia in tow/haul transmission mode can tow up to 7,400 lb.

In this day and age, power has to come in a way that’s responsible to the environment. This all-aluminum V8 power plant is an ultra-low-emission vehicle (ULEV) that has received a ULEV-II rating.

The fuel economy is rated at 13 mpg city and 17 mpg highway for 14 mpg combined. Given that the Sequoia weighs a hefty 5,985 pounds, Toyota might consider decreasing the size or weight of the vehicle or even using a cheaper alternative-type fuel.

The automatic three-zone climate control with air filter is more than adequate, and Entune Audio Plus with basic connectivity, including Bluetooth, HD Radio, and USB will meet most of your entertainment needs. My test vehicle was equipped with top-tier technology that included integrated navigation.

However, I must tell you that the 6.1-inch high-resolution touchscreen is difficult to work with. The screen is simply too small. In some cases, it is too sensitive; at other times it is hard to touch and get a response, and moving from one radio station to another is challenging. The knobs that control the radio sound and channels are too small. If you are wearing gloves, it is nearly impossible to use. On the other hand, the air conditioning adjustment knobs are large and easy to use.

Toyota is aware of these issues, and I expect they will improve these aspects of the design in their next vehicle.

A wonderful feature that enhances your adventure and extends the fun is the comprehensive cabin space management. Whether it is family, cargo, or both on the move, Sequoia has the answer. The 40/20/40-split second-row seating slides as the 60/40-split third-row seats fold flat. A flexible mix of upright and folded seats add to your storage capability, especially for larger items.

With all of the seats down, you end up with 120 cubic feet of cargo space. Some of the trims can be configured with a leather-trimmed, power-reclining third-row seat and second-row captain’s chairs with a multi-function center console, for added passenger comfort and cargo storage.

The TRD Sport Premium Package ($3,810) that came with my Sequoia includes items such as seven-passenger black leather-trimmed seats with contrast stitching, a heated 10-way power-adjustable driver’s seat along with a four-way power-adjustable front-passenger seat, an auto-dimming rear-view mirror with a compass, and a HomeLink universal transceiver.

It was a stormy week in Texas during my drive. Creeks and rivers were flooded as dry land disappeared. Some folks and their vehicles floated away. Some were trapped in their cars.

My wife and I were caught in this horrid weather near Austin. Visibility was negligible as rain and fog shrouded everything. There was nowhere to stop, so we had no choice but to journey on through the fearful territories. We needed all of the 5,000-plus pounds of the Sequoia to stay on the flooded road.

Further down, we were forced onto a dirt road that was not flooded, but the ditches were full. We hunkered down, slipped into four-wheel drive and, mercifully, made it to our destination.

We were attending the annual Texas Truck Rodeo organized by the Texas Auto Writers Association, which was to take place at the Longhorn River Ranch outside of the city of Dripping Springs. However, due to the historic rainfall in the Austin area, the entire event had to be packed up and moved to Bee Cave, Texas, where there were passable roadways.

The rain followed us home and continued for a couple more days.

The manufacturer’s suggested retail price is $51,315 for the base TRD Sport.