2018: The Year of Chinese Economic Decline

A foreseeable consequence of unsustainable ‘prosperities’ of export and consumption 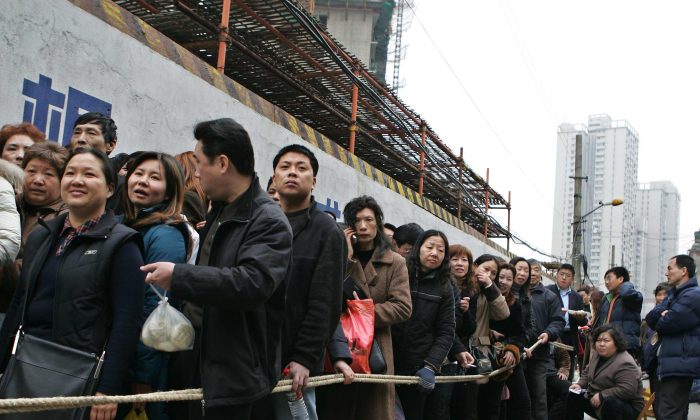 Cheng Xiaonong
Contributor
Dr. Cheng Xiaonong is a scholar of China’s politics and economy based in New Jersey. Cheng was a policy researcher and aide to the former Party leader Zhao Ziyang, when Zhao was premier. He also served as chief editor of the journal Modern China Studies.
View profile
biggersmaller
Print

As we bid 2018 farewell, we see China’s 40 years of economic windfalls draw to an end—in this last year, the fact that the Chinese economy is in decline has become clear as day, and for many, is a great cause for concern.
A Chinese economist warned recently that China’s economic growth in 2018 may be close to zero. As I see it, this decline is the logical consequence following the unsustainable “prosperity” drive-by exports and real estate development. Such a decline is guaranteed to continue.

In 2015, the Chinese government moderated its growth-rate estimate to the lowest in a quarter-century, and admitted that the slowdown would become the “new norm” for China. But the Chinese authorities failed to clarify to what extent the economy would weaken. Now, there are warnings that zero growth may be what the “new norm” means.

On Dec. 16 last year, Xiang Songzuo, the chief economist of Agricultural Bank of China, made a bold statement in a speech at China’s Renmin University. Xiang said that while China claimed GDP growth of 6.5 percent, the real growth rate may be just 1.67 percent, according to an unpublished study by an important organization. Another estimate, he said, revealed that the economy actually may be shrinking.

His speech went viral on Chinese social-media platforms, but the news became the target of Chinese internet censorship. The 1.67 percent and the negative number that Xiang cited would average out to around zero percent growth rate. Xiang didnt identify the “very important organization” that conducted the said research, but under today’s environment in Beijing, such terrible news isn’t something he could simply make up. Which organization dares to offer such data? Companies or banks wouldn’t dare to publish such results.

I think that only a government institute consultancy for senior economic policymakers, one that has more power than National Bureau of Statistics (NBS), would be in a position to issue internal economic warnings like that. It’s very likely that the organization is the Office of the Central Leading Group for Financial and Economic Affairs.

In the economic statistics issued by China’s local governments, analysts noticed declines in many monthly and year-to-date performance indicators compared to the same year-earlier periods. But the statistics departments manipulated the algorithm to create the impression of positive overall growth.

For example, they excluded businesses with poor performances in 2018 from 2017 data, and compared based only on businesses that are still doing well in 2018—so the data showed growth over 2017. But had the poorly performing businesses been included in both years’ data, 2018 would have shown a decline from the previous year. By focusing the comparison on good performers, the governments turned decline into growth in their reports. This obviously does not reflect the reality.

The local statistics departments’ tricks are rather awkward and obvious, making a pure embarrassment of the National Bureau of Statistics’ economic growth story. This is likely the reason why the NBS decided to forbid local governments from publishing GDP figures.

In October last year, the NBS withdrew permission for local governments to publish provincial economic data, according to a Dec. 17 article by the South China Morning Post. The excuse, as quoted in the report, is to make it more convenient to compare the data from local and national statistics bureaus. In plain language, non-government analysts would grow skeptical when seeing that the aggregated growth data from the NBS is higher than data published by the local governments prior to October 2018.

After the ban, the analysts, having no means of comparison, would have no choice but to accept the NBS’ “authoritative” data on economic growth.

Since the NBS ban, some cities and provinces failed to publish incremental growth figures for November. On Dec. 10, the Ministry of Industry and Information Technology of Guangdong Province published a brief statement on its website, saying that the ministry received orders from the NBS in October that the province should stop publishing local statistics, according to the aforementioned South China Morning Post report. I searched the statistics bureau websites of Jiangsu Province and Zhejiang Province, which are the most economically developed provinces, and found that November data was unavailable for both.

The ban only validated the warnings by Xiang Songzuo. It also explains why significant gaps exist between what the NBS is ordered to share with the public and what the country’s senior leadership knows.

Among the many major events of 2018, the trade war between the U.S. and China is the most economically significant. Now that the two sides are in cease-fire, people wonder if the economic prosperity will return once the two countries are able to come to an agreement and end the trade war. In other words, is the downward economic trend temporary, or is it here for the long term?

In “China: Ailing but not Collapsing,” co-authored by myself and He Qinglian, we pointed out that the unusual economic prosperity that began in the late 1990s is unsustainable, and that decline is inevitable. Broadly speaking, the economy of any country is supported by consumption, investment, and exports. Decline occurs when any of the three loses momentum. We often refer to this pattern as the “three-horse carriage.” Why are the three horses slowing down?

Before 2009, export was the strongest horse, and created a decade’s worth of “export prosperity.” But as production cost soared in China, foreign investment in apparel manufacturing gradually moved to other countries. The export industry could no longer maintain its annual growth of 25-35 percent, and the growth slowed after 2009. With or without the trade war, the export horse would have been exhausted sooner or later. The trade war, caused by trade deficit and China’s rampant infringement of intellectual property, is a stab in the horse’s leg. This was fully elaborated in my article “The Fate of China’s ‘World’s Factory’” published by The Epoch Times in Chinese last Oct. 8.

Since about 2009, investment has become the top horse pulling the Chinese economy. The most active investments were in real estate and infrastructure, which brought a “construction prosperity” phase of less than 10 years. Construction prosperity accelerated urbanization nationwide, but also caused a real estate bubble. The housing supply is enough to cover demand for the next 20 years, and prices are boosted to unaffordable levels for salary earners, meaning that the real estate bubble cannot grow any bigger. Today the bubble is already shrinking. It was proposed in a recent central economic work session in Beijing that future investment should focus on not-for-profit public welfare projects in rural areas. This means Beijing has realized that a stimulus like the 4-trillion yuan infrastructure investment Wen Jiabao launched 10 years ago to boost real estate development would not work in today’s China. The real estate bubble that resulted from Wen’s strategy threatens China’s financial security, and has become a major headache for Beijing. The real estate route has reached an end, and the once hard-working investment horse is keeling over.

The only horse left now is consumption, but this one is also struggling to stay on its feet. When thousands of millions of people in a rural population are seeing their incomes stagnate, and urban residents overburdened with high costs of housing, education and healthcare, and worsened by waves of layoffs and salary cuts, the consumption growth in 2018 is close to zero. In 2005 China’s retail growth was 24 percent, compared with 4 percent in the first 11 months of 2018, a figure that includes 2 percent from inflation. The net growth, therefore, is only 2 percent, a 7-percentage point decline from 2017. This trend is very likely to continue.

Along with the economic decline, China’s revenue is also dropping. According to official data, revenue in November 2018 was 1.08 billion yuan, or 5.4 percent lower than the previous November. April saw the highest revenue in 2018 at 1.85 billion yuan, which was over 40 percent higher compared the previous year. Comprehensive analysis shows that the revenue decline in November is mainly due to overall economic decline, instead of the tax cut introduced the same month.

Will accelerated economic reform create a new economic prosperity? The analysis above indicates that the failure of all three horses in the economic field is a manifestation of macroeconomic principles, and not just a consequence of systemic defects. Reforms cannot solve the problems of export contraction, the real estate bubble, and weak consumption. In conclusion, the economic decline in the second half of 2018 was no accident, but a foreseeable consequence of the unsustainable “prosperities” of export and consumption.

Cheng Xiaonong
Contributor
Dr. Cheng Xiaonong is a scholar of China’s politics and economy based in New Jersey. Cheng was a policy researcher and aide to the former Party leader Zhao Ziyang, when Zhao was premier. He also served as chief editor of the journal Modern China Studies.