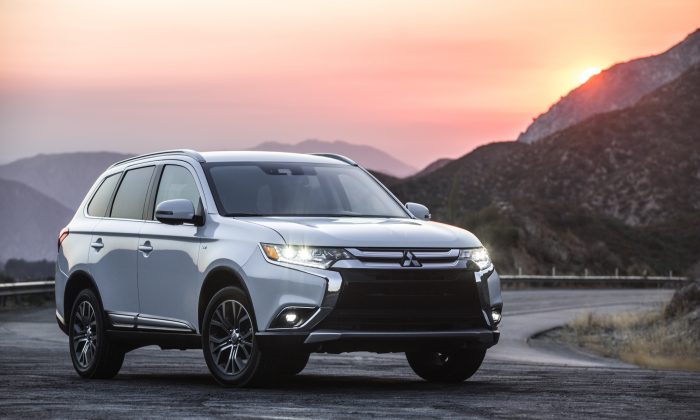 Looking at its exterior, the Outlander is fronted by auto on/off halogen headlights, fog lights, and a rugged front bumper, with eye-catching silver accents just below the prominent chrome grille bars. On the sides are body-color keyed door handles and automatic-folding heated side mirrors. The exterior package is wrapped up in privacy glass at the back, silver roof rails on top, and finally, 18-inch two-tone alloy wheels carrying the whole payload.

A maximum of 166 horsepower produced by the 2.4-liter SOHC MIVEC four-cylinder engine is directed by electric power steering. The engine also cranks out a peak 162 lb.-ft. of torque for hauling folks and cargo. The top-of-line GT model is powered instead by a 3.0-liter V6 that cranks out 224 horsepower and 215 lb.-ft. of torque. Active front differential adds to the balance of the car, providing greater driving stability.

The continuously variable transmission (CVT) smooths the transition through the gears maximizing engine efficiency at the approach.

The Outlander’s interior is quietly impressive. Admittedly the model called for a working Navigation system, but it was not activated, which somehow affected the backup camera and blind-spot monitor.

The standard third-row seats were impressive and versatile. They split 50/50 and are easily stowed with the pull of a single fold-and-store strap, but they can also quickly return to their upright position by raising the seatback. In addition, the 60/40 split-and-fold second-row seat gives you numerous passenger and cargo configurations to choose from.

At the front, there was no open storage. A little open pocket for keys or a phone would have been nice. The two cup holders were just large enough to fit a regular-size cup or can. There is in-door storage with shallow bottle holders and a small center box under the armrest.

Even though the 2018 Mitsubishi Outlander is a seven-passenger, four-door SUV, it possesses some sporty blood in its personality. The torque is more than adequate, the roominess is sufficient, and the handling has greatly improved from previous years.

The seating is comfortable, and items surrounding the driver, such as the steering wheel and the infotainment system, are well placed so they are easy to command.

For the SEL model, the manufacturer’s suggested retail price is $25,995 for the FWD version and $27,995 for the version with the S-AWC (Mitsubishi AWD system). However, after visiting several Mitsubishi dealerships, I discovered that the sales staff were more than happy to discuss “bottom-line pricing.”

Durhl Caussey writes a car column read around the world. He may be reached at this newspaper or at dcaussey@sbcglobal.net