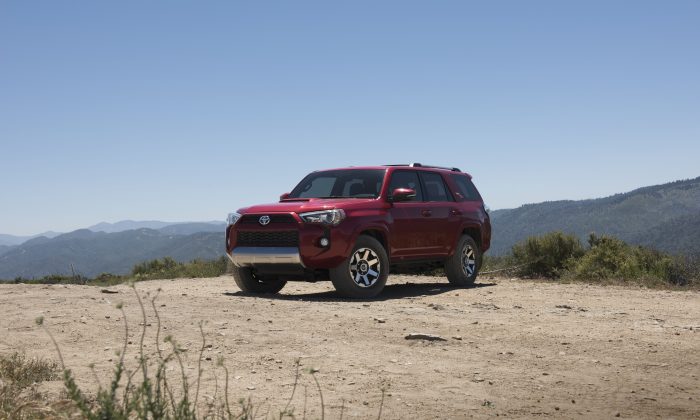 This tough body-on-frame SUV with its aggressive styling has been sold across the globe for 30 years.

The Toyota 4Runner has a powerful drivetrain. The 4.0 L DOHC 24-valve V6 engine with Dual Variable Valve Timing with intelligence (VVT-i) provides 270 horsepower at 5,600 rpm and 278 lb.-ft. of torque at 4,400 rpm. The five-speed automatic transmission is a rugged companion to the power plant, and together they tough it out through rough terrains.

Fuel consumption for the powertrain is rated at 17 mpg in the city and 20 mpg on the highway, for an 18 mpg combined average.

The 4Runner has developed a “good time” attitude, and it is built to conquer.

To fulfill the off-roading promise in its name, TRD Off-Road is equipped with part-time 4WD with Active Traction Control (A-TRAC), which allows different driving configurations for different driving surface conditions. A lever-type 4WD selector makes it easy to switch between 2WD and 4WD, and then to the low range to conquer the forthright challenges. For really slippery situations, there is locking rear differential.

A lever-type 4WD selector makes it easy to switch between 2WD and 4WD, and then to the low range to conquer the forthright challenges. For really slippery situations, there is locking rear differential.

Inside, the 4Runner has a rugged, earthy look. Clean interior trim and instrument panel layout give you a clear view and allow you to command the 4Runner for whatever task you have in mind. Whether it’s power, traction, temperature, or navigation, fulfillment is just a knob, touch, or voice command away.

The Smart Key illuminates automatically at the approach. The doors and rear liftgate open with the touch of a handle. Once inside, a push of the button gets you started.

The 4Runner has a 6.1-inch high-resolution touchscreen with an integrated backup camera display. It would be a tremendous improvement if the screen size were 7 inches instead. SiriusXM Satellite Radio enriches the drive and Siri Eyes Free keeps the driver’s eyes on the road.

The 4Runner is well equipped with modern electronic assists, such as an integrated backup camera display with a projected path. Its size allows for a cupboard of storage options, and complementing the roominess are an eight-way power-adjustable driver’s seat with lumbar support plus a four-way power-adjustable front passenger seat.

Finally, there are three frequently useful features for people who like to travel (especially off road), enjoying the scenery and looking forward to the destination.

The sliding rear cargo deck allows quick and easy loading of large and heavy items. The deck itself can support up to 440 pounds and can double as seats anywhere the vehicle is parked.

The Power Vertical Sliding Rear Window on the liftgate allows easy access to the storage area. No need to raise the liftgate—just lower the power rear glass with the push of a button. There is all your stuff!

The 40/20/40 fold-flat second-row seats provide room for everything you need. With both seats folded, the vehicle can accommodate 88 cubic feet of cargo. When the seats aren’t folded, they recline for better comfort. Time for a snooze.

Light truck and SUVs have been commanding a larger share of the automobile market. This year over 17 million vehicles will be sold and over 60 percent will be trucks and SUVs. In fact, as Toyota Camry sales have declined, 4Runner sales have increased by 18 percent. Vehicle buyers want more than just a means to travel; they want an exciting experience. The 4Runner has developed a “good time” attitude and it is built to conquer.

The 4Runner may not travel as well on city roads as the Highlander, but for off road, there is none better than 4Runner.

The manufacturer’s suggested retail price is $39,295. The Kinetic Dynamic Suspension System will add $1,750 and the Convenience Package another $499.