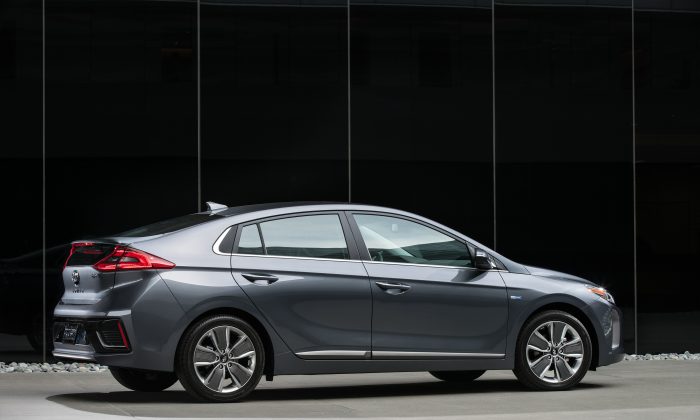 The 2017 Hyundai Ioniq will be the first dedicated vehicle platform with three electrified low- and zero-emission powertrain choices.

The gas-electric hybrid variant of the Ioniq has arrived in showrooms, while the fully electric model is slated for sometime this spring and the plug-in hybrid model this fall.

Ioniq is sleek, aerodynamic, and formed from carefully derived surfaces.

Like I mentioned earlier, the three powertrains will be on a single dedicated platform. This platform design is coupled with the latest in safety and convenience technologies and will appeal to a wide range of buyers.

My home state of Texas welcomed nearly 400,000 newcomers last year. Most moved to cities like Dallas, Houston, and San Antonio. These cities will grow to become mega cities, accommodating more people and putting a squeeze on available space for everyone and their cars. A higher standard of living will also make it cost more to live.

Toyota may have been the first to discover this situation, since Japan is one of the most urban countries in the world. When the cost of car ownership soared, Toyota created the mass hybrid market to relieve the pain of fuel cost, and the Prius scattered the competition.

But this new Ioniq will not scatter easily, if at all. It will meet the needs of millennials as they crowd into cities and suburbs. By 2020, 40 percent of new car buyers will be millennials. Ioniq may well crowd out current competitors like the Kia Nitro, Ford C-Max, and Toyota Prius.

A larger interior, progressive technology, excellent mileage, and a fair price will lead to success.

The currently available Ioniq Hybrid is a conventional hybrid that achieves up to 58 mpg. The yet-to-come Plug-in Hybrid is going to achieve up to 27 miles solely on electric power, and the upcoming Electric version will bring a pure-electric driving range of up to 136 miles.

Ioniq Hybrid is powered by a 1.6-liter Atkinson-cycle four-cylinder gasoline engine that produces 104 horsepower and 109 lb.-ft. of torque, assisted by a 32 kW electric motor powered by a 1.56 kWh lithium-ion battery pack to crank out 43 horsepower and 125 lb.-ft. torque. The total output is 139/195 combined.

The gears shifted effortlessly with the six-speed automatic dual-clutch transmission (DCT). The plug-in hybrid is set up with the same gasoline engine and transmission, but adds a larger 8.9 kWh battery pack and a more powerful 44.5 kW (60 horsepower) electric motor that can be charged in 2.25 hours. This vehicle has a max pure-electric driving range of 27 miles, as previously mentioned.

The 88 kW electric motor in the Electric model churns out 188 horsepower and 217 lb.-ft. of torque, and carries the largest lithium-ion battery pack. With its 28.0 kWh capacity, it takes 4 hours to charge on a standard level-2 EV charger, but it also has standard DC fast-charging capabilities that allow it to get an 80 percent charge in 30 minutes.

Outside, Ioniq is sleek, aerodynamic, and formed from carefully derived surfaces. Its body lines and design form add to the aerodynamic sleekness. The exterior is fluid and shaped with a sporty, hatchback-like profile.

Low rolling resistance Michelin tires give the Ioniq enhanced levels of efficiency. The Ioniq can be fitted with 15-, 16-, or 17-inch wheels, depending on the model and options.

Inside, the cabin has a futuristic look based on Hyundai’s “Purified High-Tech” design philosophy with an ecologically sensitive focus, giving the interior a sleek, light, and purified feel.

The Ioniq uses recycled or ecologically sensitive materials. The interior door covers are made of plastic combined with powdered wood and volcanic stone that provides the same quality appearance of typical plastic-based materials. Raw materials extracted from sugar cane are partly applied on the headliner and carpet. Paint with renewable ingredients extracted from soybean oil is used to achieve lustrous colors on key components.

Depending on the selected drive mode (Sport or Eco), the background color of the gauges changes to provide that important information at a glance.

Ioniq is equipped with a high-definition 7-inch TFT information cluster. As would be expected from new vehicles today, smartphone integration with the infotainment is provided. Apps for compatible phones keep numerous critical information and operations of the vehicle at your fingertips. To top it off, wireless phone charging on the center console is also available.

The Ioniq Hybrid starts at $22,200, and has an estimated driving range of 690 miles. It comes in Blue, SEL, and Limited models.

The Plug-in Hybrid will be available in the fall, and the Electric model will go on sale around May in California only. The latter will be offered in two trims: The base Electric starts at $27,500 and the up-level Limited model begins at $32,500 (plus $835 for destination). The Hundai Ioniq Electic is eligible for up to $7,500 in federal tax credits and a $2,500 clean vehicle rebate.