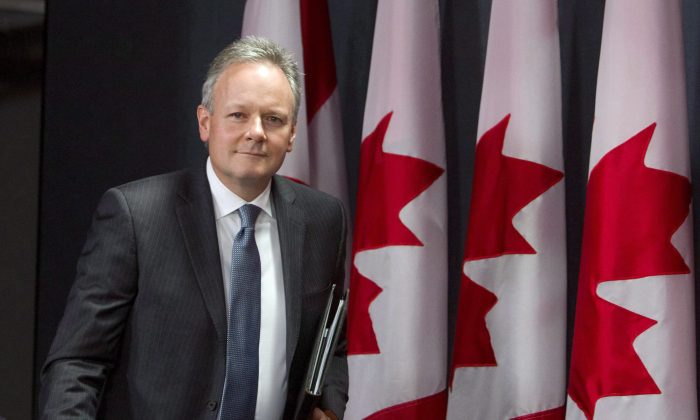 Bank of Canada Governor Stephen at a press conference in Ottawa on Dec. 16, 2015. He was chosen by the Canadian Press as Canada’s business newsmaker of the year for 2015 as the Canadian economy tried to deal with the drop in oil prices. (The Canadian Press/Fred Chartrand)
Business & Economy

Building a solid base for 2017
By Rahul Vaidyanath

Canadian economic growth in 2016 should be better than in 2015, but 2017 is looking even better. As the economy says good-bye (and good riddance) to 2015, the incoming year is about transition—assuming it doesn’t get hit with another shock.

Oil prices plunged over 30 percent in 2015 and its adverse effects on investment and employment in the energy sector shrank the Canadian economy in the first half of the year. The loonie, which mirrors oil prices, is heading for its second worst year on record (after 2008) falling 17 percent (as of Dec. 22).

The challenge has been to deal with the immediate impact of the oil price shock, while the benefits from a lower currency and oil prices take longer to manifest. The Bank of Canada cut rates twice in 2015 to bolster the flagging economy.

That sets the stage for 2016. Cheap oil and accommodative monetary policy should continue to spur consumer spending and economic growth. The chance of a recession in Canada—or the U.S.—is unlikely.

The Bank of Canada claims the Canadian economy is well diversified. 2016 is the transition year—to prove that other parts of the economy can offset the energy sector woes.

CIBC’s call for 2016 growth is 1.7 percent. It argues that the transition to non-energy and services exports needs more time to offset the drop in energy sector investment.

Financial markets are ‘once again pricing meaningful odds of another rate cut in 2016.’

CIBC says capital spending won’t rebound until at least 2017 and that for the energy sector, even if West Texas Intermediate (WTI) recovers to US$50-60 a barrel, the recent investment cuts won’t be reversed. “More volatility in oil prices will favour more flexible means of production, something that puts Canadian oil sands production with its high fixed cost share at a long-term disadvantage,” according to CIBC economists Benjamin Tal and Nick Exarhos.

RBC is more upbeat on the Canadian economy for 2016 with a base case call of 2.2 percent GDP growth. This is driven by an improvement in consumer spending, the Liberal government’s fiscal stimulus, and non-energy exports. It builds on the positive momentum expected to be seen in October and the fourth quarter of 2015.

Additionally, RBC sees WTI rising to US$60 in late 2016. This should blunt the impact of a further drop in energy sector investment. “The gradual increase in prices is expected to limit the magnitude of investment cuts by Canadian oil producers to 13 percent in 2016,” according to RBC’s December 2015 Economic and Financial Market Outlook.

RBC also expects concerns about inflation to “become more prevalent” in late 2016 and the BoC’s overnight rate target to finish 2016 at 1.00 percent. This is due to the effects of the fall in energy prices truly being transitory and no longer holding down inflation. RBCs forecast calls for the overnight rate target to rise another 1.00 percent in 2017.

But it’ll be tough sledding in early 2016, as financial markets are “once again pricing meaningful odds of another rate cut in 2016,” according to BMO, due to the recent leg lower in oil prices. WTI is down roughly 15 percent in the last month. BMO’s base case is for no change in rates in 2016.

The Canadian consumer is already up to its neck in debt and it’s hard to see the housing market repeating its 2015 performance. Mortgage rates could increase if Canadian bond yields get pulled higher by their U.S. counterparts. Many economists expect the Fed to raise rates at least three times next year.

Thus, 2016 may be the year that the factors that were boosting Canadian growth over the past few years finally peter out, as oil has already done.

At least it looks like 2016 will not have a harsh winter like the past two years. And that bodes well for the economy. The bottom line points to a better 2017 as 2016 is looking like a year of adaptation and transition for the Canadian economy with modest growth.